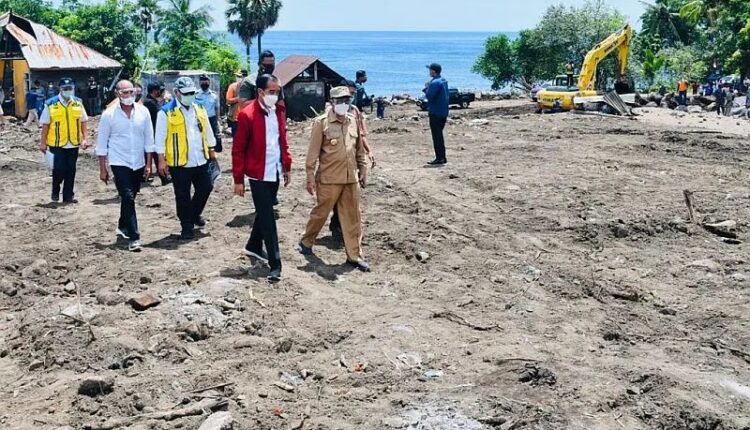 President Jokowi visited East Nusa Tenggara to see the location of the disaster, as well as to entertain the victims. The arrival of the President should be appreciated, because he intends to ease the burden on the refugees. As well as seeing what they still need to survive in the midst of displacement.

The flood disasters in NTT and NTB made the people suffer, because road access was almost cut off. So that air and land routes were opened when providing assistance to them. More than 100 people became victims and other victims are still being searched for. This flood occurred because of the Seroja Tropical Cyclone that hit the NTT, NTB, and even Timor Leste areas.

President Jokowi visited NTT on Friday, April 9, morning. According to the plan, he will also visit Adonara Island and Lembata Island, because these two places are the most isolated areas. So it is feared that the condition will be the worst and the President will check whether aid has arrived there.

The arrival of the President was very well received by the people of NTT. They want to complain about their hearts and ask for help so that the help will come smoothly, because there are those who do not have time to save their property. Hopefully, public facilities will be rehabilitated soon. The refugees also requested that their houses be rebuilt by the PUPR Agency.

When the President comes, we must appreciate it. Because it shows great concern for all its people. A President’s schedule has been filled in full for the next few times. But he still insisted on coming to NTT, because there were people there who needed help and affection from the leader.

In addition, the arrival of the President shows his character who really likes blusukan, aka seeing firsthand the condition of his people. It is not the type like an official during the New Order era who was ABS alias as long as the father was happy, and only received reports from his subordinates. President Jokowi is not like that, because he prefers to interact with his people.

The President promised to solve the post-flood problem in NTT properly. After sending the Minister of Social Affairs, the Minister of PUPR, the Chief of Police, General TNI, and other officials to come to the flood location and solve various problems in Nusa Tenggara, this time it was his turn to personally see the floods and the refugees there.

When he saw the suffering of the refugees, the President accepted their input. According to one NTT resident, the assistance that came was sufficient. However, the price of fuel has risen drastically. This is normal because it always happens after a disaster, because gasoline is scarce and as a result the price goes up like crazy.

To cope with the increase in fuel prices, there needs to be more supply. So that the scarcity of gasoline, pertalite, and other fuels can be overcome immediately. This of course requires handling from related officials and the President promised to solve this problem quickly, so that the suffering of the refugees does not multiply.

President Jokowi also instructed to search for flood victims more intensively. According to data, floods in NTT killed 117 people. However, there are still many victims who drowned and have not been found. It is hoped that the joint team from the SAR team, volunteers and apparatus, can work faster, after assistance in the form of safety equipment arrives.

The President’s arrival to NTT was not too late, but he went there at the right time. In fact, the most crucial thing is the post-flood period, because it takes time, energy, and the right kind of thinking to solve the various problems there. For example the increase in the price of fuel oil, the victims who have not been met, the distribution of aid, etc.

) * The author is a citizen living in Maumere