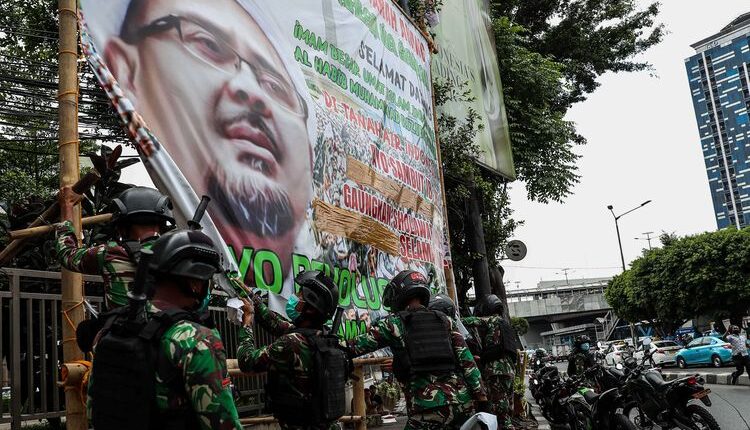 In recent times, law enforcement officials have been aggressively lowering giant billboards with the image of Habib Rizieq Shihab . People actually feel happy with the curbing, because they are already antipathy to it. The removed billboards also contain provocation and have the potential to destroy peace in Indonesia.

Habib Rizieq Shihab and the FPI members were angry because the billboards with HRS pictures were taken down by the authorities. They consider this incident unfair. Kar ena, according to them, removing billboards is the task of the Civil Service Police Unit (municipal police), not a soldier.

Pangdam Jaya, Maj. Gen. Dudung Abdurrachman, stated that the removal of billboards with Habib Rizieq’s picture was his order. According to him, members of the Regional Military Command (Kodam Jaya) would remove provocative billboards. Also take action against anyone who invites to carry out a revolution. Because don’t let anyone destroy the unity and integrity in Indonesia.

Continued Maj. Gen. Dudung Abdurrachman, these billboards had been removed by the Civil Service Police Unit officers. However, it was established again. Finally, he ordered his men to immediately take down the giant billboard with the picture of Habib Rzieqq , because they were not orderly. This statement hit the pro test of FPI and Habib Rizieq badly .

The Pangdam Jaya statement confirmed the people’s allegations. When the video of removing billboards went viral , it was obvious that the officers were wearing green stripes. The community also fully supports the actions of the army because they have been feeling upset since Habib Rizieq returned to Indonesia. For continuing to make controversial and heartbreaking news.

Habib Rizieq is considered a figure who spreads hostility and terror, not kindness. The public felt disappointed because he, who was a religious leader and a descendant of the Prophet, instead lectured in a very harsh tone and deliberately opposed the government. He boasted about a moral revolution, but the truth was an alleged act of treason.

Besides that, Habib Rizieq’s billboards also had a provocative tone. So it is feared that it will invite people to oppose the government. Also undermining peace in Indonesia. We are a country of Pancasila and democracy, so the actions of mass organizations that want to win on their own and continue to ask to be tolerated even though they have committed bad deeds are a big mistake.

In addition, the public is also aware that Indonesia is a country with diversity and diversity . Habib Rizieq ‘s billboard that was revealed was a symbol of the head of a mass organization, which unfortunately is still racist and does not represent a good leader . so that when the billboards were removed, their reaction was joy, not sadness.

The mass organization led by Habib Rizieq even accused the palace of ordering the removal of billboards. This made the people shake their heads. Why is the President acting like this? Do members of the mass organization think before speaking? Do not just slander if there is no evidence.

Donny Gahral from the Presidential Staff Office stated that the TNI and Polri had already been pledged to maintain unity in Indonesia. However, when there is a group that wants to destroy peace and unity, the TNI may act. In that sense, the actions of the Kodam Jaya subordinates did not violate the law, because they were allowed, for the sake of peace in Indonesia.

Do not forget that the TNI is a friend of the people and the community even fully supports the actions of the authorities to curb similar billboards. Because the TNI is trying to keep the conditions in the community conducive. Hopefully no one will be consumed by provocation, by billboards or other types of media.

The removal of billboards with Habib Rizieq’s design by members of the Jaya Military Command was highly approved by the community because they had been very upset by provocation from HRS and its mass organizations. Habib Rizieq is considered a figure who always makes trouble and delivers provocative lectures. So it is only natural that when there is a giant billboard containing the photo, it is immediately lowered.

Indonesia is Experiencing Progress in Responding to Covid-19