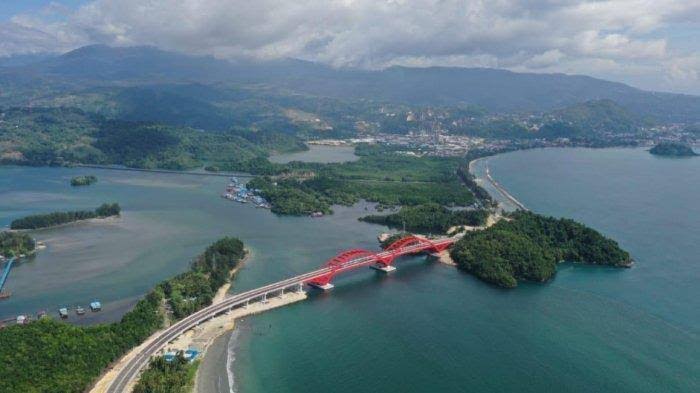 By: Abner Wanggai) *
President Jokowi has continued to prioritize the development of the Papua region, even since his first term. The government continues to be committed to continuing these various programs as an effort to achieve social justice for all people.
Last January 2021, West Papua Governor Dominggus Mandacan met with the Presidential Chief of Staff Moeldoko to be able to support the acceleration of the development of the welfare of Papua and West Papua in accordance with Presidential Instruction No. 9 of 2020.
On this occasion, Dominggus conveyed three important points related to green economy development, protection of the rights of indigenous peoples, and capacity building and basic services of indigenous people in Papua.
Dominggus also expressed his hope that the Central Government would support the concept of a strategic area for West Papua National Tourism, development of superior local non-deforestation commodities based on indigenous peoples, development of local food security, and protection of mangrove ecosystems and essential ecosystems.
Moeldoko also said that his meeting with the Governor of West Papua would be the material for the implementation of Presidential Instruction No.9 of 2020.
Previously, the President of the Republic of Indonesia, Ir Joko Widodo, in a limited cabinet meeting held on March 11, 2020, had delivered three directives regarding Papua and West Papua.
First, a comprehensive evaluation of the governance and effectiveness of the special autonomy fund distribution.
Second, the need for a new spirit, a new paradigm, a new way of working. The government must build a system and design a new, more effective way of working in order to be able to produce leaps of prosperity for the people of Papua and West Papua.
Third, the special autonomy policy for Papua and West Papua is consulted with all components of society in Papua and West Papua. So that the government will formulate the best policy, which will make Papua and West Papua more advanced and prosperous.
The development target of the Papua Island region in 2024 is an average economic growth of 6.6 percent, a regional economic share of 2.1 percent per GRDP 2024, investment needs of Rp 41.1 trillion, a poverty rate of 18.2 percent and a open unemployment to 2.5 percent.
Furthermore, the direction of development policy in Papua as a whole in 2020 – 2024, namely: accelerating development to catch up with other regions through economic transformation from natural resources-based industries to local commodity-based industries and tourism, downstreaming the mining, oil and gas industries.
The implementation of Special Autonomy (Otsus) for Papua Papua and West Papua is based on the cultural and contextual approach of Papua and is based on ecology and customary territories.
Increase in conservation areas and environmental carrying capacity for low carbon development.
On different occasions, the Minister of National Development Planning / Head of the National Development Planning Agency (PPN / Bappenas) Suharso Monoarfa revealed that the government is strengthening development designs in Papua based on indigenous Papuans.
Suharso said, Presidential Instruction (Inpres) Number 9 of 2020 concerning the Acceleration of Welfare Development in Papua and West Papua is the basis for the government’s commitment to solving the root problems experienced by the Papuan people.
He said that significant changes were reflected in the decrease in the percentage of poor people, from 54.75 percent in March 1999 to 26.55 percent in September 2019 through a number of steps in major design that had been carried out for Papua and West Papua.
As for the grand design of accelerating welfare development in Papua and West Papua, namely, the government agrees that the special autonomy framework in accordance with Law Number 21 of 2001 for Papua Province is an asymmetrical, affirmative and contextual step in managing development, regional governance and public services.
In the context of the sectoral regulatory framework to the budget framework, the Special Autonomy has sparked a new spirit of policy formulation specifically for Papua, both at the central and regional levels.
Meanwhile, Deputy Minister (Wamen) of Public Works and Public Housing (PUPR) John Wempi Wetipo proposed the formation of a Papuan authority body that can directly oversee the construction of the Trans-Papua road.
Wempi said he saw a lot of damaged roads, collapsed asphalt and broken roads. He considered that the road damage occurred due to the absence of direct supervision by the government of the development process.
Of course this input can serve as an evaluation for the government to continue to build Trans-Papua by forming an authoritative body.
Development in the land of Cenderawasih is one of the government’s programs for the realization of equitable development, so that the evaluation and progress of development must go hand in hand.

Supporters of Rizieq Shihab Are Involved in Terrorism