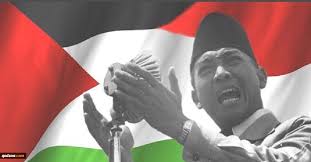 The Indonesian government continues to support Palestine to be free from colonialism which has been shackling it. Apart from providing moral support, the government is also helping diplomatically by encouraging the UN to have the courage to end the conflict in Gaza. Also donated money worth 32.1 billion rupiah.

The conflict between Palestine and Israel heated up when Israeli soldiers attacked civilians on the border with Palestine. The public immediately criticized them because officially, the area belonged to Palestine but the people were just expelled. In addition, the attack was carried out in the fasting month at night and there was a shooting at the Aqsa mosque complex, thus polluting the sanctity of Ramadan.

President Jokowi immediately reacted violently and condemned Israel’s atrocities, then cut off diplomatic relations with the country. In addition, the President also urged the United Nations to be firm in mediating the problems in Palestine, because only this world organization has the authority. As a result, UN Secretary General Antonio Guterres immediately rebuked Israel and they promised to immediately carry out a ceasefire.

Meanwhile, Foreign Minister Retno Marsudi stated that the Indonesian government will continue to support Palestine, not only moral assistance but also providing material assistance. It is hoped that a donation of 32.1 billion rupiah will be able to alleviate the suffering of the Palestinian people, especially since the average victims of this attack are women and children.

Why does the Indonesian government continue to support Palestine? Because the close relationship between the two countries has existed since the 1920s, long before we became independent. At that time, Indonesian fighters were already preparing if one day they became independent from the grip of the Dutch and then sought support from other countries. One of them is the Palestinian Mufti.

The Mufti was very impressed with the struggle of the Indonesian people, especially since Palestine and Indonesia are both countries with a Muslim majority population. Finally, when Indonesia became independent in 1945, Palestine was the country that first recognized its independence, and even lobbied other countries to support the Republic of Indonesia to be recognized internationally.

Therefore, when Palestinians are in pain, it is only natural that we repay their kindness (even though it happened around 100 years ago). The relationship between the two countries is still very close, even the Palestinian people also regard Indonesian citizens as brothers.

Moreover, Palestine has actually had an independent status since 1988, but it has continued to be eroded by Israel, which is trying to annex their territory little by little, until finally there is a struggle for an area in Gaza. So that the Indonesian people continue to support Palestine who is in a cornered position. It is hoped that with outside support, they will find out about themselves and then slowly retreat.

Indonesia’s position in the international world is also quite influential, because it has a position as a member of the UN Security Council. So when the UN Secretary General was pressed, he wanted to listen and finally rebuked Israel harshly. Hopefully a ceasefire will actually happen and there is new hope for an end to the conflict in the Gaza region.

Indonesian people also do not remain silent by collecting donations initiated by charities and alms. The money collected will be sent directly to Gaza and other areas in Palestine that are in need. There has also been assistance from the medical team to be deployed there. In addition, Israel is being urged to open up the Palestinian border areas so that we can send this aid.

Hopefully, with all the assistance provided by Indonesia, it will alleviate the suffering of the Palestinian people. Because we are like brothers so that if one is attacked, the other will feel the pain. Assistance from Indonesia means a lot to the Palestinian people and hopefully the ceasefire and justice in Palestine will soon be realized.

Transfer of Employee Status Does Not Weak KPK