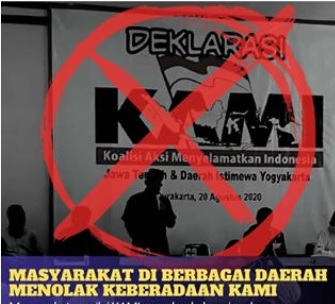 People are already very tired of facing KAMI because they constantly spread sensations. Because they are boasting to save Indonesia. But can only comment negatively. When there are members who were arrested, they also do not accept and playin g victim . Even though it is clear that he made a big mistake. Since its inception, last August 18 2020, KAMI have promised to save Indonesia which they think of as a shipwreck.

Unfortunately, however, after a few months, they immediately saw their politically charged mode . Unfortunately, their intellectual abilities are used for negative things and deceive the people. The first lie was a promise to save Indonesia. If they really want to be superheroes for this country, why not open job vacancies because many need jobs? Or they can also distribute groceries and other packages to reduce poverty. In fact nothing.

Meanwhile, the second lie is that KAMI actually support the spread of covid-19, albeit indirectly. When there is a labor demonstration, they are openly supportive. Even though demonstrations can lead to new corona clusters . Because it’s hard to keep your distance. Whereas a month earlier, KAMI protested against the simultaneous regional elections because it could cause the spread of corona .

KAMI are also proven to spread fake news and provocation in the community, through social media. They understand that some people, including a short axis and less able to know the truth of the news be shared on the Internet. This weakness is exploited and they create hoax narratives that seem as if the government is always doing wrong, even though it’s a lie. Because of this act of spreading lies, 8 KAMI members were arrested. They come from Medan and Jakarta. This incident occurred because they violated Law number 11 of 2008, aka the ITE Law. The reason is because it has been proven to make hate speeches and spread hoaxes in cyberspace. They are threatened with imprisonment for up to 6 years.

However, KAMI even became inflamed and blamed the authorities, and considered the arrests not in accordance with procedures. Even though the payoff was appropriate, because the investigation warrant was dated 12 October while the arrest was 13 October. And there is evidence in the form of screenshots of status and group conversations, which create provocations in the community. KAMI lawyers team was emotional and submitted this case to Komnas HAM, last October 27th. The funny thing is, the lawyer when being interviewed admitted that these arrests should not have happened because they were only spreading hoaxes . This means that they ignore the spread of fake news and underestimate the authorities. Even if there is just one fake news spread in the community, the consequences can be fatal. The public can believe it and get into mass panic. For example, when there is a hoax about the omnibus law that removes pes angon.

In fact, every worker who is laid off still gets severance pay, plus guarantees of losing his job. KAMI complaint to Komnas HAM also has the potential to be rejected outright because they have proven to provoke the public to demonstrate. It is estimated that thousands of rioting mobs could rush to the front of the DPR RI building and ask for impeachment. So that KAMI can launch acts of treason without having to go directly to the streets. KAMI mode which is full of lies has actually been realized by the community .

So that the demonstration failed to impeach and until now the omnibus law has never been deleted. Because this law will actually prosper Indonesia. But KAMI were even scared, for whatever reason. There should be no more victims of KAMI because they will do everything they can to get what they want. Social media is used as a tool to spread hoaxes and provocation, so that people ignite their emotions and turn to hate the government. Hopefully KAMI will soon repent and no longer act that makes the people tired of seeing it.