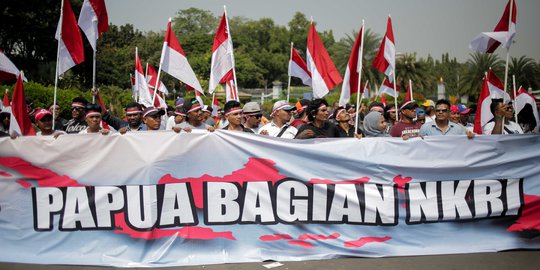 Papua is undoubtedly a part of Indonesia. However, unfortunately there are parties who insist on liberating Papua. I don’t know what’s on their mind, why do they always want to be apart? Even though Papua has officially become part of the Republic of Indonesia, since 1969.

The provinces of Papua and West Papua have often been teased by resentful separatist groups. They carried out acts of terror, both against civilians and security forces, with the aim of gaining support in liberating Papua. According to them, the current government is illegitimate, and it is better to form the Federal State of West Papua.

Even though the OPM was wrong when it sued for Papuan independence. According to the Coordinating Minister for Political, Legal and Security Affairs Mahfud MD, Papua has fixed part of Indonesia. The relationship between Papua and Indonesia is final, because Papua is part of the Republic of Indonesia. In that sense, no one else can challenge Papuan independence, because it has been integrated since decades ago.

Mahfud’s statement confirms Papua’s position as a province in Indonesia. Indeed, Irian Jaya Province (now Papua and West Papua Provinces) only joined the Republic of Indonesia after the Act of 1969. However, its status is legal, because the former Dutch colony automatically became Indonesian territory, according to international law.

When there is special autonomy, it will benefit Papuan people . A. Because there is a rule that the governor, deputy governor, mayor and deputy, must be OAP (native Papuan). So that they can build their own regions and are trusted by the central government.

If there are rules like this, do you still feel that Papua is being colonized by Indonesia? In Bumi Cendrawasih, the people have been given special autonomy funds, as well as the power to govern their own regions. If a lot has been given, why is the OPM still agitated and insisting on independence? They should be more concerned with logic, not emotion.

Likewise, when someone plots the independence of Papua, like Benny Wenda, it is he who is actually violating international law. There are no allegations of human rights violations as accused by Benny et al. Because the people of Papua feel comfortable being Indonesian citizens.

Allegations of human rights violations in Papua are only hoaxes that are deliberately spread to gain sympathy from the international community. If an OPM member is caught and then jailed, or hit by gunfire, that is normal. Because he dared to fight law enforcement. On average, OPM and KKB attacked first, and when they were opposed, the actions of the authorities were correct.

How can it be when a member of the OPM or KKB is hit by a bullet and then accused of being a victim of human rights? Whereas in fact, he has sharp weapons and intends to attack the authorities, because he considers them to be colonizers in Papua. The authorities only carry out their duties, in order to uphold the sovereignty of the Republic of Indonesia.

Papua has been fixed as part of the Republic of Indonesia. Ti dak there are able to separate the two, because it is in conformity with international law and national law. OPM and KKB are just acting up and looking for sensations. If it is true that they want to become leaders of Papua, do they have the capability? It must be seen from the perspective of education, experience and ability, not just a desire to rule and separate Papua from Indonesia.

Don’t mention anything about Papuan independence anymore. Due to the fact that people on Earth of Cendrawasih are happy to be part of Indonesia. They do not want to separate themselves from the Republic of Indonesia because they have a high sense of nationalism. He also hates the OPM because he often goes too far in order to fulfill his ambition of liberating Papua.

The pandemic has not ended , people must be vigilant and obedient