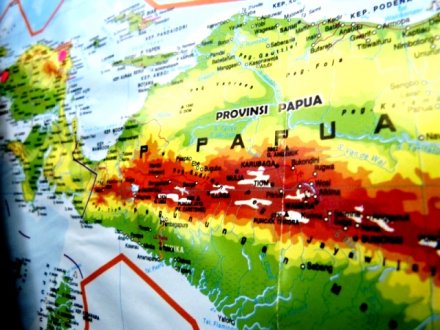 Papua’s recent condition can not release from Papua’s freedom Movement or known as OPM brute force and uncivilized movement because every day we hear about OPM’s torture saga to civilian person. In this week, OPM had shot teacher and Burnt some homes in several district in Papua.

Since OPM’s rebelion history they had made negative list of humanity tragedy in Papua. An internally, OPM’s has problem itself, those terrorist group did not solid because everyone who had OPM’s commander line have compete each others to be highest OPM’s commander.

Theoritically and basically, regarding preconditon of terror group and acts, we must agree if OPM’s should label as terrorist group because OPM’s maneuvre and their human rights violence which have been doing by them until today is a rational reason we can call OPM as terrorist group especially to Papua people.

Because of that, tthere is not make sense if Amnesty International Indonesia has always give defend to OPM’s. So, it’s logic if former Democrat Party political, Ferdinand Hutahaean has called them as betrayer group.

Terror group has made terror acts which makes people fear, spreading horror situation and making uncertainty including killing civil persons. OPM’s attitude and their barbar movement as a terror groups because of that, Indonesian government must declare OPM’s as terror groups.

*) The writer is a national political observer.

Condemn the KKB’s heinous actions against the people