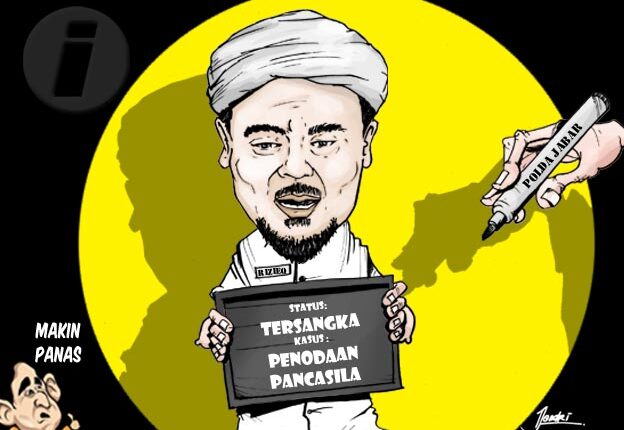 Habib Rizieq’s return to Indonesia has caused a myriad of problems. Apart from not being obedient to carry out self-quarantine, Habib Rizieq actually invited many people to attend various activities which were packed with religious events. The public urged the National Police to be firm and trace the criminal allegations by the crowd of Habib Rizieq who were a clear example of PSBB violations.

Kombes Pol Tubagus Ade Hidayat as Director of the General Criminal Investigation ( Direskrimum ) said that the clarification at that time was part of the investigation stage. The aim is to determine whether or not there is a criminal element in the alleged violation of health protocols during the recent wedding ceremony of Habib Rizieq’s daughter in the Petamburan area .

Tubagus said that in one, two days it was investigative , therefore the nature of the invitation was a clarification as to whether or not a crime was present.

He said that the title of the case would be carried out after the examination stage of all witnesses was completed. According to him, a case title is needed to improve the status of a case from investigation to the investigation stage.

After the clarification results are carried out with some evidence, a case title will be carried out to be brought up to investigation.

Polda also has the authority to determine suspects in these cases. So far, Polda Metro Jaya has sent summons to 14 people for clarification regarding the crowd at Rizie Shihab’s house   on Saturday Night.

FPI frontman Habib Rizie was also summoned by police investigators to provide clarification because he had made a wedding reception for his son accompanied by a memorial to the Prophet Muhammad’s birthday, which caused a crowd.

Apart from that, the investigators also summoned the RT / RW, linmas , village heads and local subdistricts as well as the mayor of Central Jakarta. The KUA will also be asked for clarification including the Covid-19 Task Force, the DKI Provincial Government Legal Bureau and several guests who attended.

Previously, the Head of the Public Information Bureau ( Karopenmas ) of the National Police’s Public Relations Division, Brigadier General Awi Setiyono, said that there were allegations of criminal acts behind the crowd case made by supporters of Habib Rizieq in the Petamburan area last week.

The crowd problem also caused the previous Head of Police for Metro Jaya, Inspector General Nana Sudjana to be removed by the Chief of Police from his position.

It should also be noted that the event held by FPI was attended by around 7000 people. In addition, the FPI headquarters in Petamburan also held activities that became a gathering place for large crowds.

On a different occasion, West Java Governor Ridwan Kamil submitted the matter of imposing sanctions related to mass gathering at an event organized by FPI at Mega Menung on November 13.

Emil said what happened at that time could not be controlled, this was because the atmosphere of euphoria was like a demonstration which sometimes increased in number.

He also appealed to all leaders of mass organizations to understand the current situation of the Covid-19 pandemic.

Meanwhile, the DKI Jakarta Provincial Government does not only impose sanctions related to the crowd of the Prophet’s birthday at Petamburan . Crowds that occur in Pondok Ranggon , East Jakarta and in Tebet, South Jakarta, will also be sanctioned.

The event was broadcast live on FrontTV’s youtube channel . In the event, Ahmad Riza was seen wearing white clothes and wearing a mask. He sat in a row with the mayor of South Jakarta, Marullah Matali.

The event was also attended by many congregations. It is clear that there is no arrangement for the distance between one congregation and another. Also seen were pilgrims who were not wearing masks.

We also need to know that implementing physical distancing in a pandemic moment is very important in order to minimize the potential for Covid-19 transmission. One concrete effort to implement this rule is to avoid or stay away from the crowd.

Physical Distancing is important because it is considered capable of slowing down the rate and number of corona virus infections .

Temple University epidemiologist Krys Johnson said that maintaining distance is not only for one’s own purposes, but also affects other people around him. By maintaining a distance, this can minimize transmission via droplets .

On this basis, the Regional Police have the authority to investigate suspected violations of anyone who knowingly does not comply with the health protocols established by the government.

Community Supports the Integrity of the Republic of Indonesia in Papua

SUPPORT OF RELIGIOUS CHARACTERS TO THE GOVERNMENT TO HANDLE COVID – 19