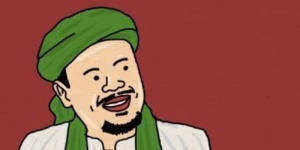 The exception issued by Rizieq Shihab’s team of attorneys was rejected by the panel of judges. The rejection of the exception was considered appropriate, because Rizieq’s exception was very unreasonable. He has been entangled in several articles, and cannot get out of prison arbitrarily after issuing an exception.

Rizieq Shihab is still trying to walk free from prison. He filed an exception or rejection filed by the defendant, which was accompanied by the reason that the charges he received were made in an incorrect manner. Really trust Rizieq’s team of attorneys when filing the exception.

However, the panel of judges rejected the exception at the East Jakarta District Court. The head of the panel of judges, Suparman Nyompa, was unable to accept Rizieq’s objection to the crowd case in Petamburan. The indictment of the public prosecutor is in accordance with article 143 of the Criminal Procedure Code.

Suparman continued, when the exception was rejected, the trial of the subject matter of the case was continued. So that Rizieq still has to be accountable for his actions behind bars, while waiting for the next trial schedule. In addition to the crowd case, he is also involved in the case of deceit because he falsified the results of the swab test, refused to self-quarantine after returning from abroad, etc.

Meanwhile, the rejection of the exception by the panel of judges occurred because there was an assumption that general and special crimes were combined (by Rizieq’s team of attorneys). Namely article 160 of the Criminal Code concerning sedition and article 93 concerning health quarantine. This is not a combination, but causality.

Causality means the presence of a crowd because Rizieq instigated it first. So the two articles are indeed related to each other. When Rizieq’s team of attorneys objected and argued that the combination of general and special crimes could not occur, it was only an artificial excuse. Rizieq cannot just be free because of this exception.

The community praised the rejection of the exception by the judges. They considered that Suparman and his team had done the right thing and upheld justice. The article sued by Rizieq’s team of attorneys was not manipulative, because it was in accordance with the data and facts. Due to the fact, there was a crowd of more than 5,000 people at Rizieq’s wedding in Petamburan.

How can Rizieq’s team of attorneys accuse the article of being manipulative? Because it is true that during the party in Petamburan, there was a violation of the Canteen Law. It is still a pandemic period, and it seems that Rizieq’s legal team is still amnesic. Because he insisted on not feeling guilty after holding a massive party, even though he violated health protocols.

The proposed exception was also legally flawed. How can they raise an objection, when Rizieq Shihab is clearly guilty? This was proven after the crowd in Petamburan, nearly 80 people got corona. They are victims of the marriage cluster and have to endure the pain of coming to the invitation during the pandemic, without any health protocol. Because many guests don’t wear masks and don’t want to keep their distance.

Rizieq’s legal team plans to file an exception again at the next trial. I don’t know what else they protested and planned. What is clear is that the public is waiting for what maneuvers to be carried out next and are instead becoming a laughing stock. Because his exceptions always seem contrived and only made up for the ambition of getting Rizieq Shihab out of prison.

Just ignore those exceptions and accept Rizieq Shihab’s punishment sincerely. If he doesn’t want to go to jail, why is he desperate to break the law? As an Indonesian citizen, he should obey the law and obey every article in Indonesia. Instead of acting arbitrarily and when you are imprisoned, you play the victim. And insisted that his exception was accepted by the panel of judges.) * The author is a citizen living in Bogor

Beware of the Spread of Radicalism among the Young Generation