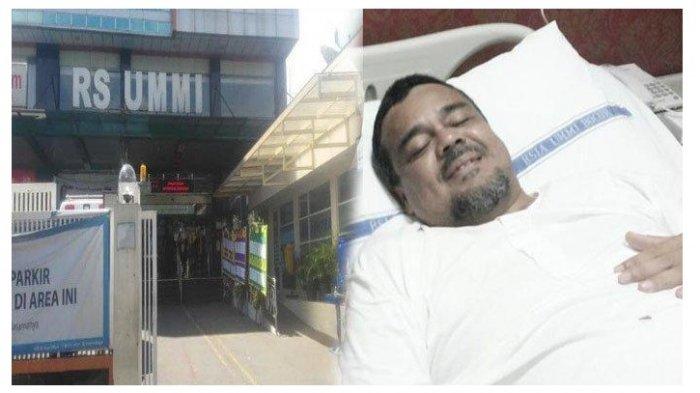 Rizieq Shihab is reported to have been treated at a private hospital in Bogor. Rumors said that he and his wife had coronavirus, but there has been no official statement about this. He should have always wanted to be tested for swab and self-quarantine, as well as be disciplined in wearing a mask, so that he was not physically exposed to corona.

The news of Rizieq Shihab’s illness made the public associate it with the formation of the new corona cluster in Petamburan and Bogor. Because in those 2 places there were activities that invited crowds and were attended by the FPI commander. If there are many people infected with the covid-19 virus, is it possible that the habib has also contracted the corona?

If it is true that he has contracted the corona it is very unfortunate, because in fact many have warned him to take the swab test, after returning from Saudi Arabia. However, Rizieq Shihab refused because he had already carried out the test before boarding the plane. He also insisted on not wanting to self-quarantine for 14 days, but immediately stepped on the gas to conduct a lecture safari.

The public also regretted why the hospital management seemed to cover up Rizieq Shihab’s health condition? In fact, the FPI management gave information that he was tired and only did a general check-up with his wife. So it must be treated in the hospital for several days.

There is also no clear explanation regarding the swab test. If it is true that Rizieq Shihab has finally carried out the swab test, why are the results not published? So the public increasingly suspects that he is positive for corona but unfortunately is ashamed to admit it, because he is already confident in not being isolated independently.

Mayor of Bogor, Bima Arya, cheered and threatened to report the management of the private hospital, because he was deemed not cooperative. He should have known each swab test, so that tracing could be held and tracing who was the next ODP and OTG. However, because the hospital seemed to protect Rizieq Shihab, it could be a problem.

The public did not sympathize with the news of Rizieq Shihab’s illness. They even seem relieved because if he is sick, it will be the result of his own actions. Rizieq Shihab acted arrogantly and did not want the swab test because he did not believe the test results in Indonesia. When he is sick it is his own fault for not wanting to be self-isolated, even though this is a mandatory protocol for ODP.

He also didn’t wear a mask orderly. Because when his congregation picked him up at the airport, Rizieq Shihab gave a speech and lowered his mask. Even though this is very dangerous, because it can transmit the Covid-19 virus through droplets. There are also mobs that can spread the virus, because they violate the precautionary rules.

Rizieq Shihab’s family also refuses to take the swab test . Even though their status is also ODP because they have organized a big party, which invited 10,000 people. They also had contact with Rizieq Shihab, whose status was not certain at that time or not, but was at high risk because he had traveled from abroad.

The community is also worried because at this time the house of the habib is being guarded by FPI members. Are they afraid that the Habib family will be arrested by the authorities? So that they act excessively and seem paranoid. In fact, when officers came, they only wanted to pick them up to do a swab test and spray disinfectant into the house.

When Rizieq Shihab was suspected of having contracted the corona, the public did not show sympathy. Because he was shown to be stubborn and broke many health protocols. Starting from refusing the swab test , avoiding self-quarantine, removing masks, to gathering the masses. The habib’s outrageous behavior made many people bully him when he was sick.