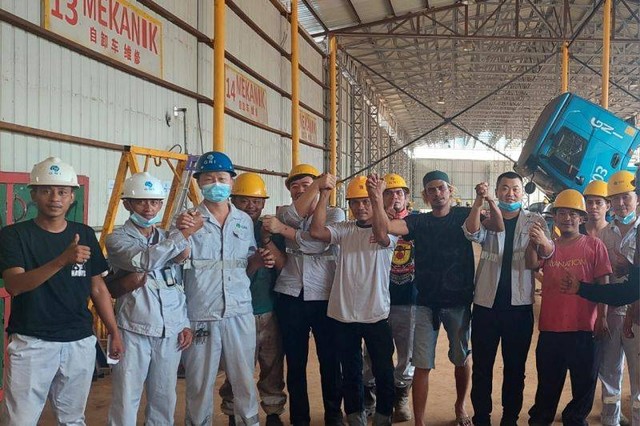 PT GNI’s investment in North Morowali received community support because it was able to provide a lot of assistance and increase the welfare of various midwives. For this reason, all elements of society hope that the harmony and unity of employees, both Indonesian Migrant Workers (TKI) and foreign workers, can be maintained.

PT GNI is a nickel smelter company that synergizes in the downstream mineral and coal ( minerba ) program in North Morowali . It is undeniable that the presence of this company has brought various kinds of benefits, especially for the surrounding community because it is able to make a very significant contribution to people’s lives.

Not only does it contribute to the community’s economy, but all the progress made by the company also contributes significantly to the regional economy, mainly by creating lots of job opportunities. This is because it is known that the company has opened new jobs for the whole community and is able to absorb up to more than 4 thousand workers and plans to continue to increase it to more than 10 thousand new workers.

The company has also built various supporting facilities, starting from access roads, jetties, PLTU, batching plants to residences for employees. In fact, PT GNI has also helped the community a lot in the construction of various points of village infrastructure, so that it can be used by the community to support their daily activities more smoothly.

PT GNI founder Tony Zhou Yuan said that his party is working with the local government to continue developing and realizing government downstream programs , as well as improving the welfare of local communities in various fields, ranging from education, environment, tourism and so on. Investment in PT GNI has also received a lot of strong support from various levels of government and society.

In this regard, the Kolonodale Village Head , Petasia District , North Morowali Regency , Central Sulawesi, M. Yamin Bagenda stated that with the existence of a large company such as PT Gunbuster Nickel Industry (GNI) in Morut Regency , according to him, the Regional Government in Kolonodale together with the whole community is very accepting and very support the company’s mining investment in its territory.

Not without reason, the article is because the existence of the PT GNI company is very influential on the economy that is owned by the whole community, even starting from how market activities work to MSMEs and other businesses carried out by the community which are also supported and assisted.

Then, with the incident of clashes that had occurred at PT GNI between the Foreign Workers (TKA) and Indonesian Workers (TKI) on Saturday, January 14 2023 last night causing two people to die, the Kolonodale Village Head revealed that he really regretted why something like this could happen.

Furthermore, as one of the Regional Governments in North Morowali , M. Yamin Bagenda also deeply regretted that this incident could happen. He hopes that incidents such as provocations, the spread of negative issues on social media that lead to demonstrations that result in clashes and casualties will not be repeated.

He added that the occurrence of such an incident at PT GNI had greatly affected the smooth running of the economic activities of the people in the previous Kolonodale Village , so that it had been hampered. He also hopes that in the future, all parties, both PT GNI and the workers there, will be able to communicate much better when a problem occurs so that demonstrations do not arise which actually lead to acts of violence and anarchism. Because, when all communications can be established smoothly and well, then the community will also feel the positive impact on the economy in the region.

Meanwhile, the Bahontula Urban Village Head , Budi Tangko also admitted that with the presence of the PT GNI company in North Morowali , the Regional Government in the Bahontula Village and all the people there claimed to be very supportive of the investment from PT GNI in Morut Regency .

Budi Tangko also admitted that he regretted the clash tragedy that had occurred at the nickel company some time ago. Then he appealed to all people not to be easily provoked by issues that might develop on social media, especially when these issues have the potential to undermine brotherhood in the Unitary State of the Republic of Indonesia (NKRI). The Head of the Bahontula Urban Village also hopes that such an incident will not be repeated in the future.

So, indeed the existence of a healthy investment climate from PT GNI must continue to be fully supported by the whole community, including the local Regional Heads because the company’s existence really brings a lot of benefits in terms of increasing welfare for all residents.

)* The author is an Alumni of Tadulako University , living in Morowali