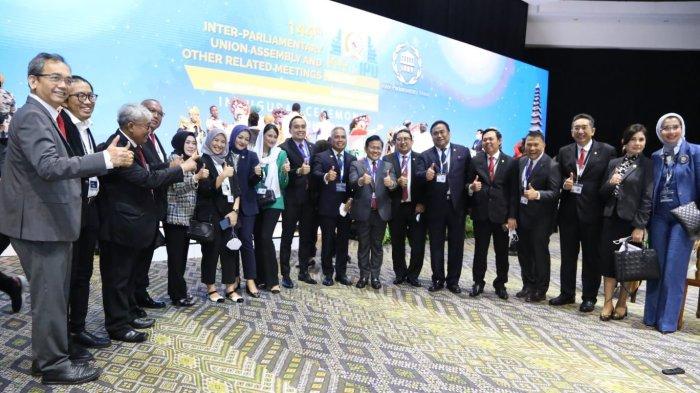 The 144th session of the Inter-Parliamentary Union (IPU) which was held in Bali ended on March 24, 2022. The closing of the International event was then marked by a flood of praise from various parties from foreign delegates who were really impressed by the good organization. Not only that, they conveyed several points and not a few of them admitted that the moment of this trial was one that cannot be forgotten.

One of the things that caught the attention of many world delegates was the leader of the Indonesian women’s parliament, Puan Maharani. Even after delivering a speech at the opening of the 144th IPU session, she was immediately praised and referred to as a very extraordinary woman. This was conveyed by a member of the Eswatini Parliament.

According to Senator Mkhululi Diami, it is not only the natural beauty in Indonesia that deserves appreciation, but because Indonesia also has a woman like Puan who is able to become a leader who represents this great country. Apart from that, for her, it means that there has been a change in the world of women in Indonesia, especially in terms of gender equality which is also an important aspect to continue to be discussed, including in the 144th IPU session.

Meanwhile, according to David Gunnlaugsson as a Member of the Icelandic Parliament, he admitted that the speech delivered by Puan was very impressive. The reason is that the leader of the Indonesian Parliament is considered capable of having good relations with various groups from around the world who are very diverse. The spirit of multiculturalism that is echoed is very important for every country to have.

It is undeniable, because the contents of the speech delivered by the Chairman of the Indonesian House of Representatives really aroused the enthusiasm of all trial participants and were also able to unite. Some of his opinions regarding the priority of dialogue and diplomacy are certainly very interesting things when responding to conflicts so that they do not burden one party at all.

Many of the foreign Parliamentary Delegations also gave very great appreciation of the ideas from Indonesia, and they were eventually adopted by New Zealand and made as one of the important items in the Emergency Item Proposal which turned out to get the most votes in the trial regarding the resolution of the conflict between Russia and Russia. Ukraine that continues to put forward the principles of humanism.

In person, Martin Chungong as the Secretary General of IPU really admires Puan’s idea, which focuses on the people’s point of view. His idea of ​​prioritizing dialogue as an effort to overcome conflict should also be appreciated. Not even half-hearted, for him a figure like the former Meko PMK is a real embodiment of the face of gender equality in the world.

Several global issues raised by representatives from Indonesia also received praise from foreign delegates, not only related to the resolution of the conflict between Russia and Ukraine. However, there is a point when Indonesia continues to strive to encourage equality and equality of vaccine distribution in all countries, then another thing that is raised is the issue of gender equality which has always been an issue even at the global level.

In addition, in terms of preparation for the provision of international events, it has also received attention and praise from many circles. The reason is that Indonesia is able to give trust and has also been considered worthy of a visit even though it is still in a state of the COVID-19 pandemic. The evidence is that 115 countries attended the discussion of the 144th IPU session smoothly. This means that it proves that indeed the handling of the pandemic that the Government of Indonesia has been trying to do has paid off. All the points from the preparations to the implementation of the 144th IPU session were responded very well by all participants.