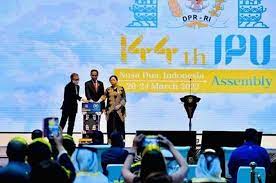 The Qatari Parliament fully supports the idea of ​​peace put forward by Indonesia at the 144th session of the Inter-Parliamentary Union (IPU) held in Bali. Dr. Hamda bint Hassan Al Sulaiti as the leader of the Qatar delegation, as the Deputy Chair of the Shura Council said that his party supported Indonesia’s idea to create world peace at the 144th IPU session in Bali.

In the discussion regarding the issue of world peace and security, the Qatari Parliament considered the need for a common vision of the ideas that have been put forward by the Indonesian Parliament regarding peace. The idea has also been adopted by New Zealand as an emergency item proposal which later became a proposal with the most votes.

Not only that, but in the meeting, the Shura Council also discussed how the Parliamentary mechanism could collectively play an active role in promoting peace by establishing new terms of reference as a solid basis or setting certain standards regarding morals and ethics related to world peace. It also includes how the role of Parliament is to be able to continue to monitor or supervise in the long term the progress of the peace.

Some of the things discussed in the session were a review of the performance reports submitted by the Secretary General regarding the impact of the IPU during 2017 to 2021, reports on IPU activities to several other reports on activities that have been carried out by the Executive Committee and other bodies under the IPU. Not only that, the session also discussed issues related to IPU membership, IPU’s financial situation to a number of topics that were scheduled to be discussed.

Meanwhile, Mohammed bin Mahdi Al Ahbabi as a member of the Shura Council is also holding a meeting with the IPU Committee on International Peace and Security. The meeting discussed how they are very interested in issues regarding peace and security operations both in the regional and global scope. Several views on this topic, considerations and efforts to reformulate how the approach should be taken if you want to carry out peace operations were also discussed.

The emergency item proposal explicitly discusses the resolution of the conflict between Russia and Ukraine which is currently heating up. Then the idea that was approved and fully supported by the Qatari Parliament was related to the middle ground approach. Regarding the self-administered mechanism, as was the idea of ​​Indonesia, the Shura Council agreed that the peace would be built on a foundation of dialogue and parliamentary diplomacy.

Of course, it doesn’t just end there, but the humanitarian aspect is indeed one of the most important aspects and is focused on being protected in the context of realizing the resolution of the Russia-Ukraine conflict. In the idea that has been put forward by Puan Maharani as Chair of the DPR RI, it is also explained that Indonesia continues to encourage the achievement of the safety of all civilians, especially for women and children.

The discussion between the Shura Council and the IPU Committee in the field of International Peace and Security also greatly appreciated how the efforts to handle refugees due to war had been listed in the New Zealand emergency item proposal, which was an adoption of Indonesia’s idea. Of course, the ideas that have been put forward by the Indonesian Delegation in the 144th IPU session have become very interesting for several reasons.

The first aspect that makes this idea very interesting is that it does not at all show any indication of condemnation of any of the parties to the conflict, be it Russia or Ukraine. In addition, it turned out that by putting forward the idea of ​​Indonesia, it turned out to be able to make dynamics happen immediately in the courtroom. This was shown when the proposals discussed by Indonesia were immediately able to break up the voting and succeeded in blocking the voting from those who supported the emergency items proposed by Ukraine because many were considered very one-sided.