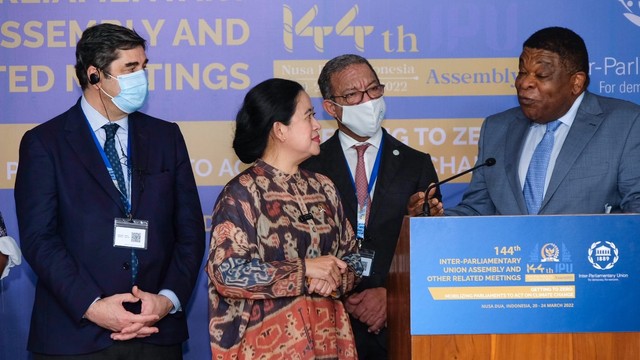 The 144th Session of the Inter Parliamentary Union in Bali until the last day went well and smoothly. Delegates from various countries debate and provide input in order to find solutions to global problems that are currently developing. Many agreements were successfully obtained through the IPU trial, and Indonesian diplomacy was praised by the trial participants.

During the IPU, the Indonesian parliament received various opportunities to strengthen diplomacy and commitment to cooperation between countries. Not only that, Indonesia has received a lot of praise from the participants of this world parliamentary forum, for the implementation of the IPU and the way Indonesia has built good relations with other countries as well as the United Nations.

For example, the Namibian Parliament stated that it wanted to communicate and learn directly with Indonesia regarding tips on good relations with the UN Bodies or United Nations (UN) Agencies, especially regarding the implementation of the Sustainable Development Goals (SDGs). This is because the Indonesian Parliament is used as an example of good relations between the legislature and the UN bodies.

On the occasion of the bilateral meeting on the sidelines of the 144th Bali IPU Session, Namimbia immediately asked to learn from Indonesia how the SDGs were implemented at the parliamentary level and at the government level.

The Sustainable Development Goals (SDGs) are a global action plan agreed by world leaders, including Indonesia, in order to end poverty, reduce inequality, gender equality and protect the environment. The SDGs contain 17 Goals and 169 Targets that are expected to be achieved by 2030. The SDGs were agreed by 193 countries at the UN General Assembly on September 25, 2015.

In Indonesia itself, through the Central Statistics Agency (BPS), the Ministry of National Planning and Development/National Planning and Development Agency (Kemen PPN/Bappenas) as well as in collaboration with other relevant institutions, periodically monitor, evaluate and report on the performance of the implementation of commitments. Indonesia in adopting the SDGs concept. In 2021, Indonesia’s ranking and points in The Sustainable Development Report are the same as the 2020 report, which is ranked 97th with 66.3 points. However, specifically in the Southeast Asia region, Indonesia ranks 6th. The implementation of the SDGs in the report shows no signs of decreasing points for each indicator.

The partnership relationship that occurs between Indonesia and the United Nations can indeed be seen from the cooperation that has been and is being carried out in various fields, including politics, law, world security and peace, economy and socio-culture. Moreover, Indonesia will become the G20 Presidency in 2022. The Head of the United Nations Representative in Indonesia has also emphasized the United Nations’ commitment to support the Indonesian Presidency at the G20 and hopes that Indonesia’s leadership will have a positive impact on the international community.

Meanwhile, the Russia-Ukraine conflict became an emergency item in the IPU session this time, where in line with the submission of the Indonesian parliament, New Zealand’s proposal regarding the resolution of the Russia-Ukraine conflict received the most votes as an emergency item in the voting which was participated by all delegates at the 144th General Debate forum. Assembly of the Inter Parliamentary Union

Meanwhile, as stated on the ipu.org page that, the 144th IPU Assembly, has condemned Russia’s ongoing use of force against Ukraine as a violation of the United Nations Charter, including the principles of sovereignty and territorial integrity. This is in accordance with the resolution on emergency matters which was placed on the agenda of the Assembly for the consideration of all members present.

The peaceful resolution respecting international law, the United Nations Charter and territorial integrity, was adopted by consensus in Nusa Dua Bali by the global Assembly of approximately 120 Member Parliaments on 23 March 2022.

The resolution notes with concern that the war in Ukraine threatens global security with the potential for future global economic uncertainty. Parliaments of the world are expected to support this call for peace to