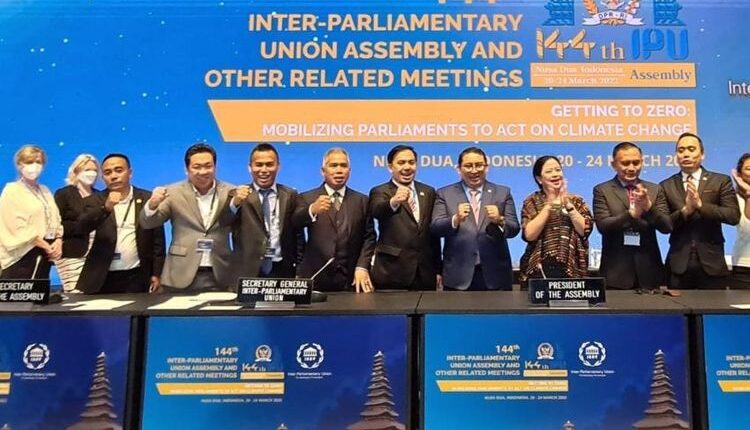 The World Appreciates Indonesia’s Success in Holding the 144th IPU

We should be proud because the 144th Inter-Parliamentary Union (IPU) held in Nusa Dua, Bali turned out to be a huge success. Even the very good impression was also recognized by the Foreign Delegates and the world because Indonesia was able to carry out the international-standard event even though in the midst of the Covid-19 pandemic, but everything went according to plan and smoothly.

Indeed, one aspect that is being highlighted by the world is how the success rate of pandemic control that has been carried out by Indonesia so far has ensured the safety and security of all participants in the IPU trial. Not only about the success of controlling the pandemic, but not a few of the foreign delegates considered that the way we carry out diplomacy and also our leadership in the international arena also deserves high appreciation.

As the host, the representative of the Parliament from Indonesia was considered capable of leading and opening the session very well and even being able to hold a consensus even though it was attended by many parties from various countries with various different backgrounds. Therefore, they also admitted that they really wanted to collaborate more intensely with Indonesia and even promised to return to visit the country because they felt comfortable, especially with the natural beauty and also the friendliness of our people.

The entire smooth running of the 144th IPU session also cannot be separated from the important role of Puan Maharani as the leader of our parliament because she admitted that she was successful in giving an important message about the positive role of parliament which turned out to have an impact in various fields and the effectiveness of parliament in handling certain issues to the highest level. International. Several important messages regarding the role of parliament that have been successful for Indonesia to be appointed are about issues that have become very critical to be discussed so far.

These global issues are about climate change, which is getting worse day by day due to the environmental damage that continues to be carried out by various elements. Then the second thing is regarding the global crisis in the handling of Human Rights (HAM), it should not be underestimated at all because it has become a basic right of every human being and must be protected and enforced guaranteed.

Furthermore, still related to the issue of human rights, Indonesia also continues to push for world peace to be created as stated in the 1945 Constitution which of course has been the goal of our nation’s founders from the start. The resolution of the conflict between Russia and Ukraine became a very hot topic to be discussed, with the brilliant solution of the Indonesian representatives who prioritized mediation and dialogue. In fact, the idea was later adapted by New Zealand into a proposal in the Emergency Item and was proven to have the highest number of votes during the trial.

Various kinds of efforts that have been continuously encouraged by Indonesia have also received direct praise from Cyhthia Iliana Lopez Castro as the Mexican Parliament Delegation. He considered that our country has succeeded in showing in the eyes of the world that we really care about the COVID-19 pandemic. Besides that, having an extraordinary leader like Puan Maharani shows that our country is very concerned about the issue of gender equality.

It is undeniable that praise after praise has come regarding the control of the pandemic that has been successfully carried out by Indonesia because since the beginning of the implementation of the 144th IPU session, they have implemented very strict health protocols. Starting from the beginning, preparations for these activities will be carried out, how the trial will run, even how to arrange the return of the delegates while still adhering to the health protocols. All of them have succeeded in getting the spotlight and attention in the eyes of the world that Indonesia is one of the countries that is very good at implementing health protocols and also controlling the Covid-19 pandemic which has proven effective.

Beware of Terror Actions Ahead of Ramadan