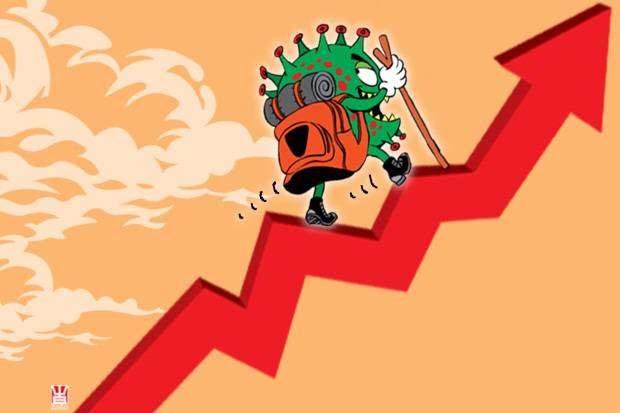 Beware of Rising Covid-19 Cases in Some Areas

The public needs to be aware of the increase in Covid-19 cases in a number of regions. This vigilance needs to be implemented by continuing to apply strict Prokes during activities.

Although in general the confirmed cases of Covid-19 in Indonesia show a slowdown in cases, Prof. Wiku Adi Sasmito as the Coordinator of the Expert Team and Government Spokesperson for Handling Covid-19 stated that there were 5 provinces that recorded the highest increase in positive cases when compared to the previous week.

Regional governments are also asked to anticipate an increase in cases in the following week and continue to increase the prevention of Covid-19 transmission in their regions. However, nationally this week there has been a 12.2% decrease in Covid-19 cases compared to the previous week.

In addition, the death rate due to Covid-19 has also decreased, even this week’s decline is much lower than the decline in the number of positive cases, which is down to 31.7%.

Even though the number of deaths is small, vigilance must be maintained because even one life is very valuable if the goal is to endemic Covid-19, so the death of even 1 case cannot be tolerated.

Wiku reminded that if the indicators were positive, the patient died and the active case could be lowered immediately. Of course, the development of Covid-19 at the national level will improve and Indonesia will be more prepared towards the Covid-19 endemic.

Meanwhile, Health Minister Budi Gunadi Sadikit reported that as many as 155 districts or cities are currently experiencing an increase in Covid-19 cases. He also appealed where vigilance needs to be done because a spike in cases is happening in neighboring countries (Malaysia) including the AY.4.2 variant which is a mutated variant of the Corona virus Delta B1.167.2 variant.

Budi also said that every day his party conducts 1,500 to 1,800 whole genome sequencing (WGS) examinations every day to detect new virus variants, including the AY.4.2 variant. Budi also emphasized that his party will guard the border, especially since many Indonesians return to and from Malaysia by land, sea and air to contain the entry of a new virus into Indonesia.

Previously, President Joko Widodo had also asked regional heads to remain careful and be aware of the slightest increase in Covid-19 cases in their regions. Jokowi said that a number of regions in Indonesia had experienced an increase in Corona virus cases, although the numbers were small.

He also reminded all parties to maximize the use of the Care Protect application platform, especially in malls, tourist attractions and markets. He also saw that there were still places where the QR Code cared for Protect was not yet available but they were still operating.

Vigilance must not be relaxed, the increase in Covid-19 cases even though it looks small must still be watched out for because the status of the pandemic is not over yet.