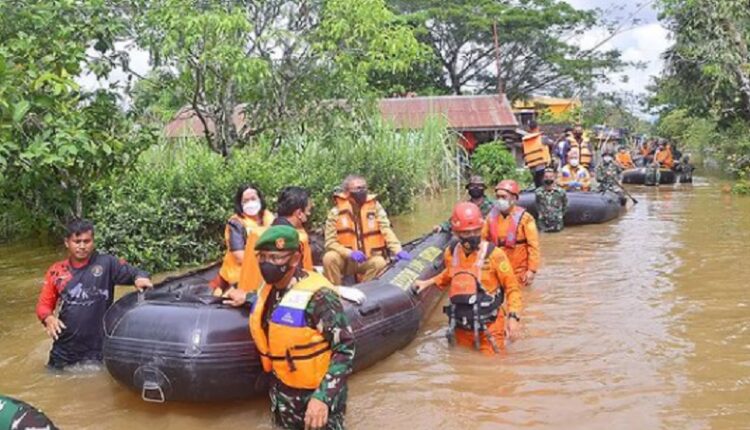 Optimal Government in dealing with floods in Sintang, West Kalimantan. In addition to carrying out the evacuation of affected victims, the Government has also distributed cash assistance to accelerate the handling of the disaster.

Flood disaster hit Sintang, West Kalimantan. BPBD is monitoring that the water flow is holding up even though it has fallen by 10 to 15 cm last Friday. This condition made the residents choose to stay in the Refugee Post.

The Regional Disaster Management Agency (BPBD) of Sintang Regency informed that the flood was still submerging several villages in the area. A total of 12 sub-districts were affected by flooding caused by the overflowing discharge of the Kapuas and Melawi rivers. Moreover, the Sintang district is located at the confluence of the two major rivers.

The flood situation that submerged several sub-districts still caused some residents to flee to refugee posts. BPBD has operated five field posts to serve the needs of the local market, such as food intake and health services. The five field posts are located in the Bamboo Monument, Traffic Post, Media Center, Ujung Kapuas Bridge and Sintang District Office, while the command post is at the Sintang district BPBD office.

Floods that hit many sub-districts have resulted in 2 fatalities and material losses such as bridges being heavily damaged by 5 units and 1 unit being moderately damaged. Responding to conditions since the beginning of the flood, the local government led by BPBD Sintang district has made efforts to handle disaster emergencies. The regional government has also extended the emergency response status for floods, tornadoes and landslides until November 16, 2021. On the other hand, BNPB continues to carry out emergency management of command posts in Sintang.

In addition, BNPB had previously sent logistical assistance and equipment to the Sintang district government in the form of 504 packages of ready-to-eat food, 501 packages of side dishes, 300 mattresses, 300 blankets, 5,000 pieces of KF94 masks. During his visit, Ganip provided tips and strategies that can be used to accelerate flood management in several areas of West Kalimantan.

From this incident, he understands that the floods that occurred in four areas in West Kalimantan were triggered by weather factors, namely the high intensity of rain in the upstream area of ​​the Kapuas River. Nevertheless, Ganip said that the flood, which is a type of wet hydrometeorological disaster, should have been prevented by various efforts.

According to Ganip, these efforts are good and correct spatial management and community behavior to be more concerned and understand about the sustainable use of nature for future life.

He also reminded that from November to February most regions in Indonesia will experience the La Nina phenomenon, which can increase the frequency and intensity of rainfall in Indonesia from 20 percent to 70 percent.

Ganip also added that what was conveyed was a directive from President Joko Widodo who said that in dealing with disasters the most important thing is prevention or mitigation.

In dealing with disasters, of course, the government cannot act alone, collaboration and synergy are needed so that disaster management can be carried out effectively and efficiently.