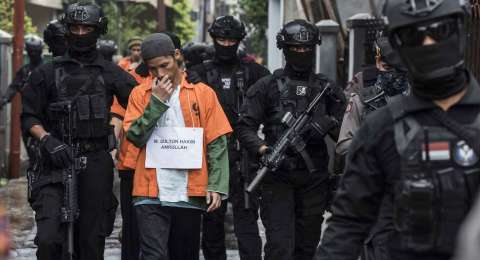 Rizieq Shihab is currently still undergoing examination in several trials, because he is involved in several cases at once. This is a consequence of the many articles he violated, it does not mean a torture. Instead, he must be held accountable for his actions. Rizieq’s examination and trial is an attempt to uphold justice in Indonesia.

When Rizieq Shihab went to prison and his exception was rejected, there were whispers from his supporters that he was being persecuted. Of course the public has more faith in the panel of judges than the former FPI members who are fans of the old man. Because there is no smoke if there is no fire. Rizie will not be jailed if he does not violate the laws in this country.

Among the articles that were violated by Rizieq were articles 216 and 160 of the Criminal Code. He was charged with violating the law on quarantine, sedition and violation of health protocols. The old man also refused to attend twice when he was summoned by Polda Metro Jaya. So it is natural that they must be tried.

Rizieq Shihab has indeed undergone many trials in district courts, and he may have felt tired and so harassed members of the panel of judges. To the point that one of them intends to sue Rizieq because he is considered disrespectful to the judge. The public is also gaping because community leaders like Rizieq actually like to talk loud and dirty, which is really embarrassing.

Even though Rizieq cannot argue that injustice is being hit, because the trial is an attempt to uphold justice. Ahmad Sahroni, Deputy Chairman of Commission III DPR RI, said that the police had considered many things when detaining Rizieq. Likewise during the trial. Because he was tried so he would not do anything outside the corridors of the law.

How can he insist on having his exception accepted and screaming that he has been deprived of his right to get justice, even though he has violated many regulations? It is precisely when he is left unchecked and not jailed and tried, there will be more chaos in this country.

First, Rizieq can continue his actions on a safari around Indonesia. Especially in the fasting month, where almost every day there are events that invite speakers. When it comes, it will attract the masses and cause new corona clusters everywhere. Even though they wear masks, they don’t keep their distance, so they still transmit the Covid-19 virus.

When this happens, it is feared that a wave 2 corona attack will occur. So that the pandemic does not end soon. Instead of transmitting a dangerous disease, it’s better to catch 1 person who is the main shop for the spread of corona, namely Rizieq Shihab.

Moreover, he was caught faking the results of the swab test, so that his lies could be duplicated by his family and cronies. If this happens, it will make it even more difficult for the covid task force team to carry out tracing of people who have contact with them. It’s terrible if someone gets corona because of someone else’s lies.

In addition, when Rizieq was brought before the panel of judges, his right as a citizen was actually being exercised. This is an attempt to uphold justice. Because if you reflect on the incident decades ago (during the New Order), prisoners like Rizieq will be thrown into prison just like that without any trial process.

Rizieq never thought about this, because he was already covered in blind anger. He wants to be free and loose like a dove, but likes to break the law and go around on his own. Is this the attitude of a former leader of a mass organization? Really don’t know myself.

Rizieq Shihab’s trial will continue, even though he is struggling to be released from prison. All processions are in accordance with applicable procedures in Indonesia. He cannot escape the bondage of the law, and must be accountable for his actions for the next 6 years.