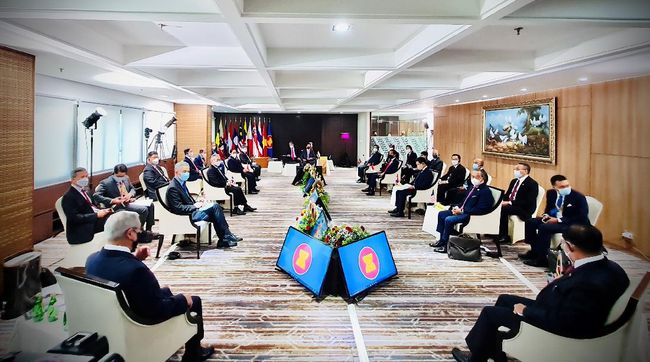 We should appreciate the ASEAN Summit this year in Jakarta. The reason is, Jakarta is trusted to host such a prestigious event. In addition, the summit is a good event for networking between ASEAN countries and could be the start of economic and business cooperation between them.

Saturday, April 24, 2021, is the opening of the ASEAN Summit in Jakarta. This event will invite representatives from each ASEAN country, from Brunei Darussalam, Malaysia, to Vietnam. The event, which is held annually, is an important arena for diplomacy and discussing current issues, as well as strengthening friendly relations between ASEAN countries.

We appreciate the implementation of the ASEAN Summit in Jakarta. First, this year’s summit will be held in person, not on line like last year for pandemic reasons. Even though the world is still hit by corona , this event is guaranteed to be held with strict health protocols. This means that Jakarta is allowed to hold the summit because it is not a red zone.

The Indonesian government is entrusted with holding an ASEAN Summit during a pandemic, because it is believed to be able to handle it well, in accordance with health standards. Everyone attending this event must wear a mask, wash their hands, and keep their distance. The selected building is also large in size, because it is to maintain physical distancing .

Second, hosting the ASEAN Summit is prestige . It means that the Indonesian government is considered professional and capable of holding this event, and it will run smoothly. Even to mend Ukung summit, route bus Transjakarta be off right for a while, so that guest traffic runs smoothly.

While the third, the ASEAN Summit is a good event to foster friendship between countries. From this close relationship, then the government can Mengel uakan stance rayuam , so they are willing to invest in this country. Moreover, since the creation of the Job Creation Law, foreign investment has greatly facilitated the bureaucracy, so it will attract their interest.

If it is scored, then the people will benefit, because investment projects are generally labor-intensive, so they can reduce the unemployment rate in Indonesia. People who have lost their jobs can apply there and get out of poverty and stress during the pandemic.

In addition, the ASEAN Summit is an event to ‘sell ‘ Indonesian tourism. when the corona vaccine has been found and the pandemic is predicted to end quickly, foreign tourists can enter and they are attracted by the exoticism of Jakarta and Indonesia. So that it will increase the country’s foreign exchange.

Vietnamese Prime Minister Pham Minh Chinh praised Indonesia as the organizer of the ASEAN Summit. The supreme leader of the Land of Blue Dragon appreciated that the crisis in Myanmar would be discussed in this event. As we know, there was a coup that led to Aung San Suu Kyi d itangkap by the Myanmar military. So that other countries are concerned.

The Vietnamese PM and President Jokowi discussed the situation in Myanmar. They hope that the crisis will end soon and that the safety of the people there will be given priority. Because the situation is still chaotic after repeated demonstrations, and the protesters have lost their lives.

At the 2021 ASEAN Summit, Myanmar sent the Supreme Leader of the Myanmar Military Junta Ming Aun Hlaing as a representative. He also arrived in Jakarta and was welcomed. This reception is not because Indonesia is pro military junta, but rather as a form of hospitality to fellow leaders of the country.

It is hoped that, after the ASEAN Summit is over, the leader of the military junta will consider ending the crisis and being more pro-people. Because other countries from ASEAN, including Indonesia, put a little pressure on it to do better and not prolong the chaos .

The ASEAN Summit which will be held in Jakarta starting April 24, 2021 should be commended because Indonesia is a good host , even though it is being hit by a pandemic. Pena nganan Summit strongly adhere to health protocols. Trust from other countries also deserves appreciation, because Indonesia is considered capable of building friendship between ASEAN countries.