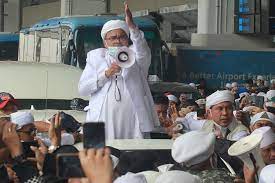 The results of Rizieq Shihab’s swab test that were announced to the public turned out to be fake. This makes the threat of his sentence even longer, because he is considered troublesome for the tracing process of people who have had contact with him. By lying, he has deceived the public, even though he has transmitted the corona to his congregation and also the doctor who treated him.

When Rizieq Shihab return from abroad, he refused to test swab reset and self quarantine. However, this old man stepped on the gas and went on a lecture safari to several places, including a hut in Bogor. A few days later, his condition dropped and was rushed to a private hospital in Bogor. The public also suspects that he has contracted the corona.

However, Rizieq denied that he had contracted the corona. In fact, he refused to do a swab test and only believed in the results of a covid test at a private institution, not a lab at a hospital. Then he escaped from the hospital secretly. After that, news emerged that the doctor who treated him had the corona. Likewise, the 80 worshipers who came to the lecture, were also busy infected with the Covid-19 virus.

This news spontaneously strengthened the public’s suspicion that Rizieq had actually contracted the corona but covered the results of his swab test. Later, he admitted to doing it for fear of being fried by a buzzer. Because according to him, the political buzzer is very terrible and will terrorize, and he said that when Rizieq was hit by corona, his condition was chronic and would die quickly.

Rizieq’s statement was further strengthened by the statement of doctor Hadiki who worked at this private hospital. According to the doctor, Rizieq came with a tired and feverish body. After that, he was tested rapidly and the results showed that he was covid reactive, so he was rushed to the hospital. The private hospital was chosen because it already had medical records, even though it was located in Bogor, not in Petamburan, which was near his residence.

These two facts certainly make the public angry, because one lie makes many people miserable because of corona. How is he afraid of being blasphemed by political buzzers, while other people are threatened with his life when infected with the Covid-19 virus? Honesty is very expensive and his lies are everywhere.

If only he was honest, it would make the task of the covid task force team easier to carry out tracing . Because after the crowds in Petamburan and Megamendung, Bogor, people who come will be examined, at least a rapid test . If the results are positive, then tracing who they came into contact with will be easier.

However, when 80 people who contracted the corona just found out that they were infected, after a long contact with Rizieq, it would be very difficult for tracing. The reason is because they have been in contact with so many people and it is very difficult to remember. Automatically 80 of these people become OTG and have the potential to transmit corona to many people. So that in Petamburan and Bogor the status is always a red zone.

Rizieq who covers up his swab test results is like Pinocchio who always lies. What was he covering up the test results for? Just because he wanted his good name not to be attacked by political buzzers, he covered it up. Even though his good name is also not very good, because the public has already branded him as a character who likes to blaspheme and speak harshly in lectures and interviews.

Hopefully, a minimum of 6 years in prison can make Rizieq aware that the public prefers bitter honesty to sweet lies but ultimately tortures him. Is it so hard to be honest? Rizieq’s lies also show that he is paranoid and is overly afraid of political buzzer attacks. Even though there is no smoke if there is no fire. Buzzer will not attack if he does not become public enemy.