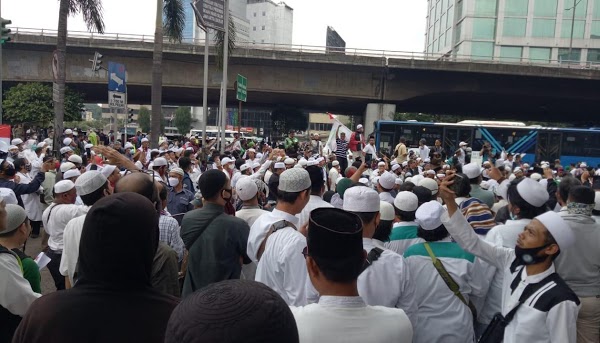 The arrival of Habib Rizieq Shihab brought losses because the facilities inside Soekarno Hatta Airport were damaged. The public also considered that Habib Rizieq’s return had a number of negative implications because it not only damaged public facilities, but also resulted in delays in various flights.

Rows of chairs in the Terminal 3 area of ​​Soekarno-Hatta Airport were the brutal witnesses of Habib Rizieq Shihab’s supporters. The chair in the waiting room broke its leg and tumbled helplessly. All of this happened because the crowd wanted to see Rizieq’s arrival firsthand and finally dared to get on a chair so that his face could be seen clearly.

Not only chairs, but many other facilities within the airport were badly damaged. The gypsum bordering the renovation area was also damaged by the masses, and the glass dividing the terminal 3 area was cracked. In addition, a number of pots containing ornamental plants and simcard outlets were also victims, as a result of Rizieq’s supporters who were too enthusiastic in welcoming him.

This incident is certainly heartbreaking. How can the mob damage the inside of the airport? They have been reminded to be orderly and not to step on the chair, but instead act as they please. The desire to see Rizieq Shihab up close trumps logic.

Is it that hard to keep the rules? They are adults after all and instead act like children desperate to climb a chair, only to see their idol’s face directly. Are the rules for them to be broken? It’s really sad, because the masses are desperate to commit vandalism and don’t think about the bad effects in the future.

Even though the masses who welcomed HRS have apologized and spread it on social media, can everything be sorted out immediately? All seats and other facilities are repaired immediately, so that prospective aircraft passengers can use them. But is the apology also accompanied by the transfer of money as compensation? Of course not.

Seats and other facilities at the airport were repaired immediately. This was stated by Yado Yarismano, VP of Corporate Communication of PT Angkasa Pura 2. He did not say how much the nominal loss was, but it is certain that his company would have to spend a lot of money to repair parts in Terminal 3.

When the seats are good again, do the masses feel the problem is clear? Where is their sense of responsibility? The masses lose their attitude and become embarrassed, because this event could be global. Shows that Indonesians cannot be orderly. In fact, only a small proportion of Indonesian citizens are highlighted.

The shrinking of the masses also resulted in congestion in the area around Soekarno-Hatta Airport. As a result, other passengers who were leaving were late, and they lost money because there was only 1 airline that gave dispensation. Did the masses not think about this? How much material loss must the passenger bear?

The masses of HRS supporters were also proven to violate health protocols. Even though they already wear masks, they still cluster together and forget the rules of physical distancing. Are you not afraid of contracting the corona from OTG? They act like that and forget it’s still a pandemic.

If you later get the covid-19 virus, will you blame the government? Though it is their own fault. Loving a character is fine, but don’t harm yourself and others. Use logic and don’t love blindly. It’s okay to idolize someone, but don’t harm others and especially yourself.

The broken chairs, glass, and other facilities in Terminal 3 of Soekarno-Hatta Airport are very embarrassing because they show the disorderly nature of some Indonesians. They arbitrarily take seats and break the rules, but don’t want to take responsibility and compensate for the damage with money. Picking up HRS at Soekarno-Hatta Airport can also cause a new corona cluster.

) * The author is a citizen and air transportation user, living in Bekasi