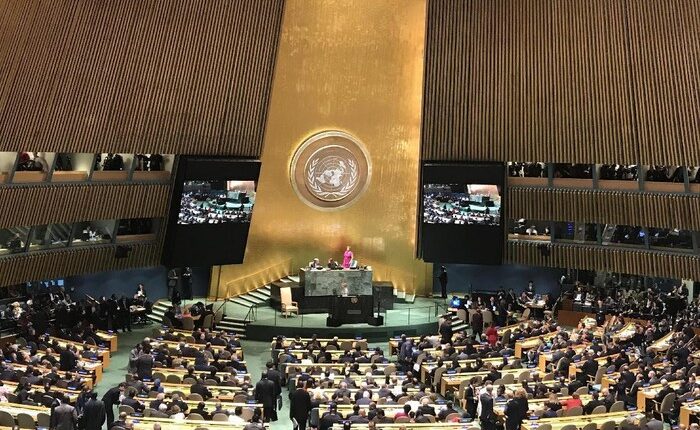 Indonesia continues to support Palestine at the United Nations Session. At this international forum, the Indonesian government continues to show support and consistently defends Palestine. The attitude of the Indonesian government is highly praised by netizens around the world, for daring to express their opinions, when the majority of representatives of other countries are silent.

The atrocities that occurred in Palestine made the whole world tremble in tears, because they could not bear to see children suffer. The attacks carried out by the Israeli army truly transgressed humanitarian boundaries and they could not be ignored. So that the Indonesian government condemns the atrocities in Palestine and invites other heads of state to urge the UN to mediate in this conflict.

Minister of Foreign Affairs Retno Marsudi flew to New York to attend a session at the UN Headquarters. At that international forum, Minister Retno emphasized that his presence there was for the sake of humanity, for the justice of the Palestinian people. In that sense, in the Israeli-Palestinian conflict, what is underlined is the violation of human rights and the United Nations as an international organization must act as the mediator, so that there is no prolonged war.

Minister Retno continued, mental safety is the top priority. A ceasefire and an end to violence must be carried out, in order to save the innocent lives of the Palestinian people. When there is an Israeli army occupation, then it is a very serious violation of international law, and must get a joint response from all over the world.

Minister Retno’s very outspoken attitude in defending Palestine was highly praised by many netizens, not only Indonesian citizens but also the world. He dared to express his opinion before the UN Session, and this was immediately heard by General Secretary Antonio Guterres. Indonesia has always urged the UN to fight against Israel and stop the ceasefire, because only this organization has the authority.

Netizens were also amazed when Minister Retno, who represented the Indonesian government, straightforwardly asked the UN to continue to be firm, not to be sluggish in handling the conflict in Palestine. Even though at the UN Session, there were many representatives of the Middle East (OIC) who in fact were neighbors with Palestine, but were not as brave as Indonesia in their stance.

Why does the Indonesian government continue to defend Palestine? The reason is that most of the victims of shootings and bombings are women and children. They are of course innocent and must be defended, even though their position is far away. Kon Flik must be stopped, because if left unchecked will massacres and how the future of the Palestinians?

When many children become victims, they may run out of population, when attacks occur every day. A genocide like this is really terrible, because it brings us back to bad memories of the Second World War. Even though after the war, there was a peace agreement and the whole world was committed to no more conflicts, and don’t let this promise be forgotten.

Apart from that , Palestine has officially become independent since 1988. Since independence, they certainly have sovereignty and should not be attacked, let alone be colonized by other countries. However, Israel does not care about this status and has attacked Gaza several times, and most recently attacked the Aqsa Mosque Complex.

Indonesia’s struggle was successful when Israel finally stopped the attack and agreed to a ceasefire. Even though the casualties reached more than 200 people, in the 11 attacks today, but we are all still relieved. Because Israel finally wants to give in and hopefully it is truly committed to not harassing Palestine anymore.

Indonesia’s support for the Palestinian people is very meaningful because the government has chosen an aggressive stance in pressuring the UN. Indonesia has its voice heard because it is a member of the UN Security Council. Indonesia’s attitude of continuing to defend Palestine, while being passive, is highly praised by netizens around the world.