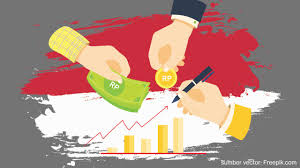 The World Bank states that Indonesia has risen in the ranks from middle income to middle to upper income countries. This is an achievement, because we are still in the middle of the co-19 pandemic. But the country’s financial condition has not collapsed in a prolonged recession, it can even rise and have a middle-up status. The public is also advised to remain disciplined about health protocols to restore the Indonesian economy.

Indonesia has successfully changed its status to a middle to upper income country. Head of the Ministry of Communications and Information Services Ministry of Finance Rahayu Puspasari stated that the Republic of Indonesia succeeded in increasing gross national income from 3,840 US dollars to 4,050 US dollars. The World Bank has calculated it so that our country status will rise to middle and upper classes.

The World Bank makes several classifications as to whether a country deserves to be considered as only middle or upper income. The details are like this, for a country with a small income, the GNI is 1,035 USD. While a lower middle income country, its income is 1,036 USD – 4,045 USD. Middle to high income countries have income of 4,046 USD – 12,535 USD, and countries with high income status of income above 12,535 USD.

Indonesia’s achievement achieved since July 1 2020 is certainly a good news. Because we can still achieve higher income, even in the midst of the co-19 pandemic. Even though in the early quarter of 2020 income per capita only rose 3%, in the following months it could increase .

Indonesia’s status as an upper middle-income country is the result of years of hard work by the government. The government is trying to improve economic resilience and have growth in various other fields in various ways . Among other things by building infrastructure and making it easier for bureaucracies in many public service offices.

The Ministry of Finance also explained that the government was trying to maintain this status. You do this by increasing export taps and structural reforms . Also improve industry capabilities and capacity, and reduce the current account deficit. In addition, there are policies to strengthen human resources through social protection, health programs, and education.

If human resources are smart, economic actors will also be smarter, and Indonesia’s GNI will rise slowly. Therefore, government programs aimed at improving youth education and health should be supported. Do not even be ridiculed and said only imaging.

In addition, to support Indonesia’s financial condition so that it gets better, in addition to infrastructure development there are also innovations in technology to respond to industry challenges in the future. The government is also trying hard to keep the state budget healthy. All is done for the prosperity of the people of Indonesia.

Actually, what are the benefits of having status as a middle to upper income country? One of them is being able to attract foreign investors. Indonesia is considered a healthy and stable country in the economic and political environment, making it suitable for investment. So with the addition of investors, it will certainly benefit and make income per capita rise.

If a country has a status of middle to upper income , then it reflects an increase in people’s purchasing power. Even in the midst of the Corona storm, in reality there are still many people who are excited about shopping for clothes and foodstuffs ahead of Eid a few months ago. Even after Eid, the market and shopping which re-opened in New er normal , began to be crowded by buyers. This certainly shows that in fact there are still many people who are rich.

Indonesia Optimistic Past the Pandemic Covid-19