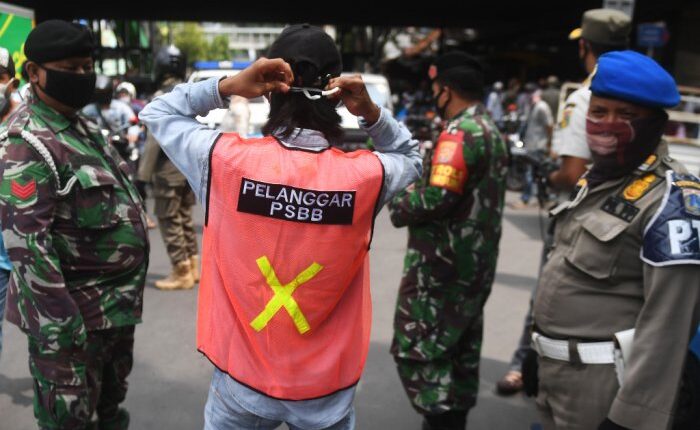 PSBB transition makes many people happy because they may leave the house. But of course by complying with health protocols regulated by the government. When someone violates the PSBB transition rules such as not wearing a mask, will be subject to punishment. This sanction is given so that they will give up and always be orderly in their activities when the PSBB is in transition.

The number of people who misinterpret the PSBB transition aka new normal to back to normal makes some kind of chaos. People do activities outside the home without protection from masks. They also rode motorbikes and rode cars with many passengers. As if the corona has passed and can be free to wander around, even go on a picnic to the beach and outside the city. Though it is still dangerous because this disease has no vaccine.

To overcome the chaos during the PSBB transition, 35 joint officers were deployed around Senen. They are on duty and supervise whether there are those who do not obey the rules, for example not washing their hands in the space provided or not wearing masks. Sometimes people need to be flicked in this way in order to remain abiding by the rules and not underestimate the protocol.

These violations were then sanctioned by members of the Senen District task force. If someone is found violating the health protocol, they will be told to sweep the streets for 15 to 20 minutes. Another penalty is cleaning up market facilities and infrastructure.

Why social sanctions? According to the Senen Sub-District Head, Ronny Jarpiko, this is so that the community is more obedient in obeying the rules during the PSBB transition. After sweeping, the person was told to sign a statement, so as not to repeat his actions. It is hoped that this sentence will be effective in disciplining people to obey regulations during the co-19 pandemic.

Whereas in Surabaya there are similar social sanctions imposed on transgressors of PSBB transitions. If there are people on the streets without masks, they are arrested by officers and told to sing for 10 minutes. If you refuse, then another punishment option is to feed ODGJ, aka people with mental disorders. This is certainly considered terrible for some people and is expected to provide a deterrent effect, so that they do not violate the PSBB transitional rules again.

This social punishment is given to these people to educate them and also teach them not to underestimate health protocols. If there are people who protest why the community seems to be being controlled by the police or sub-district task force, then it needs to be investigated more deeply. Because it turns out that this social sanction is shameful and effective in making them give up to repeat it.

When many people break the rules of the PSBB transition and are given punishment for sweeping the streets or cleaning the market, then they will think again. It’s better to wear a mask than having to overheat and get tired when cleaning the road or the inside of the market. Moreover, it is certainly embarrassing, because seen by many people. They might also go viral because of being caught on camera being subject to social sanctions by officers.

In addition to social penalties, there are also sanctions in the form of fines to transgressors of PSBB. In general, those who violate are stall owners, cafes, and other businesses that do not obey the rules. For example, there is no limit on visitors to their businesses so there is no physical distancing, cashiers and other employees do not wear masks and gloves, even hours until midnight. The provincial government of DKI has even pocketed 370 billion rupiah during the transition PSBB, as an accumulation of community fines that violate the rules.

To crack down on people who are still stubborn when the PSBB is in transition there must be strict sanctions. Can be a social punishment or a fine in the form of money. All this is done so that all levels of society are disciplined and obey the rules during the PSBB transition.

)* The writer is a contributor of Cikini Press Circle and Students