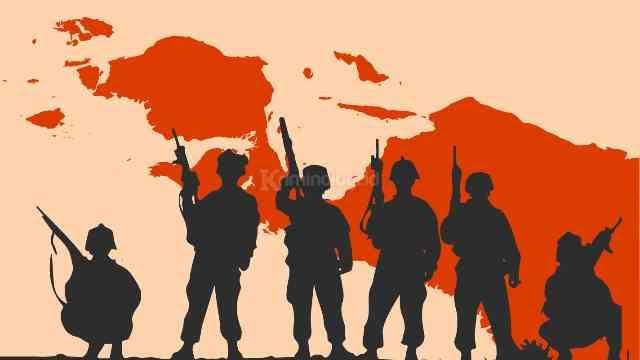 The movement of the Terrorist Separatist Group which is part of the KKB seems to still be a threat to the security of the Papuan people and the sovereignty of the Republic of Indonesia on the earth of paradise. Those who fly the Morning Star flag apparently still want to separate from Indonesia and justify any means to spread terror against Papuan civilians.

Violence that often occurs in Papua seems to be intolerable. Even from year to year, there have been many victims of shootings by KST.

With the terrorist label attached to the KKB, of course the government will know who is the party that gave the injection of funds to them.

Moreover, a question mark emerged when it was discovered that KKB could buy weapons and other necessities, even though he was not working.

In addition, with regard to the terrorist label, Komjen Pol Paulus Waterpauw continues to remind the public, especially in Cenderawasih Earth, not to misinterpret, where the labeling is only specifically aimed at KKB.

This is because the crimes committed by the KKB were not only directed at the security forces, but also targeted civilians, educators and health workers.

Paulus also said that the last time he went to Yakuhimo, he learned that a worker who was carrying bricks had been attacked by arrows by KKB. After falling, the victim was then killed using an ax.

He said KKB already had sharp weapons and then carried out violence against the community. Ask for food, ask for funds. They did this to Papuans, even by burning their houses.

As a Papuan figure, he considers that the conflict in Papua must be viewed with a legal approach, because anyone must obey state rules.

Therefore, Paulus warned, if later it was decided in court against terrorist actors in Papua, the group would have big consequences. Not only the actors on the ground, but also the brains behind the scenes.

Meanwhile, Member of Commission I of the Indonesian House of Representatives Bobby Adhityo Rizaldi said that the label of terrorism for KKB means fulfilling the elements to be prosecuted according to the Terrorism Law.

Consequently, the government is obliged to mobilize all its resources in carrying out certain measurable actions.

The labeling of terrorists against the KKB of course needs to be massively socialized. In addition, labeling a terrorist against the Papuan KKB will also not have problems with the international community.

Meanwhile, the Papuan native Tadeus Wenda in February 2021, he considered that the separatist movement would only undermine the integrity of the Unitary Republic of Indonesia. Papuan students in North Sulawesi firmly reject any separatist actions in Papua or North Sulawesi.

He also appealed to fellow Papuan students who were studying in North Sulawesi not to be provoked by provocation issues that were intensified by irresponsible elements.

He also hopes that Papuan students in North Sulawesi together with other elements of society will continue to support government programs for the welfare of the people.

Various provocations of the KKB continue to be avoided by the Papuan people, the people are also not afraid to reject these provocations because more and more TNI members are on guard, especially in vulnerable areas such as Intan Jaya.

The Papuan people are aware that the KKB is only a handful of people who want independence from Indonesia. However, they are not aware that currently the Bumi Cenderawasih region has developed rapidly, thanks to the special autonomy program and other central government concerns.

Since the KKB was labeled as a terrorist group, of course it made all components of the nation to respond that the terrorist organization is a common enemy that must be eradicated quickly, firmly, and thoroughly.

Reza also believes that the war against terror groups is not only fought in the real world but also in cyberspace. So that netizens and millennials also have a stake in maintaining the sovereignty of the Republic of Indonesia even through social media.

Terrorist separatist groups have become increasingly disturbing, they have been proven to spread fear by threats and destruction of public facilities, so they deserve the punishment they deserve.

)*The author is a citizen living in Solo