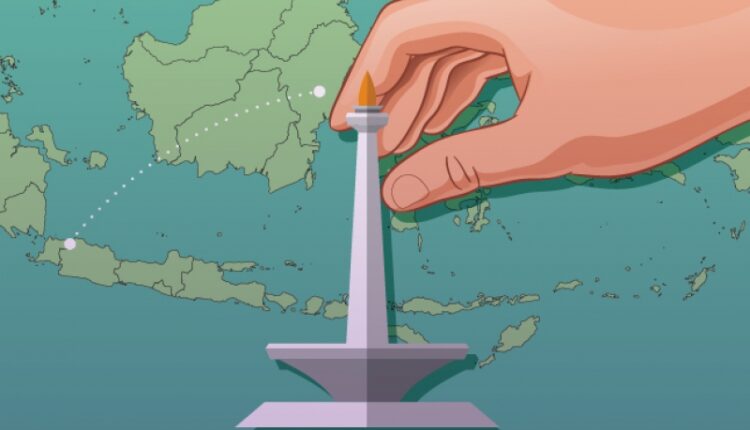 Equitable development is the current goal of the government, and one of the efforts being promoted is the government’s plan to move the location of the capital city.

The Government’s decision to move the State Capital (IKN) to East Kalimantan is a reorientation effort in the context of equitable development and economic transformation. The program appears to have entered into fiscal policy in 2022.

The Minister of Finance, Sri Mulyani, in a working meeting with the DPR in Jakarta at the end of last May, said that the relocation of the capital city was important because it reflected the need for equitable development, non-Javanese and non-Jakarta centric. The new capital city needs to be established to create a balance between the ideals of the nation’s progress, prudence and the ability to support state finances.

The Minister of Finance believes that the development of a new capital city is something that is in accordance with the needs of Indonesia in the future which is modern, has high mobility, changes demography and a sustainable or sustainable environment.

For financing and mitigating the risk of moving the capital city, it is carried out through a combination of the state revenue and expenditure budget (APBN) and through a cooperation scheme between the government, business entities, private empowerment and assignment of state-owned enterprises.

Thus, the medium-term and long-term needs of the development needs of economic recovery, fiscal consolidation, as well as continuing to view Covid-19 as a short-term will not change.

On a different occasion, Rizal Edy Halim as an economic expert from the University of Indonesia (UI), assessed that the relocation of the capital city could encourage development orientation outside Java so that it could be more evenly distributed between regions.

Garuda itself is a symbol of a big house or palace for brotherhood, unity and harmony living together.

The Minister of National Development Planning/Head of Bappenas, Suharso Monoarfa, explained that the IKN master plan in East Kalimantan was completed last year. Currently, the government is still preparing the implementation of the transfer. Starting from drainage, area boundaries, main points or cores of IKN development covering an area of ​​5,600 hectares have been determined.

However, the preparation process for moving and construction is still limited due to the Covid-19 pandemic. The transfer of IKN to East Kalimantan is also one of the steps for the government to improve the national economy.

Suharso said that with the construction and relocation of the capital city, it is hoped that it will be able to hoist national economic growth and create 140 thousand jobs. However, the transfer and development of the IKN will be carried out after Indonesia has achieved herd immunity.

He said, the government will wait for herd immunity for 15 months or in March 2022. So we get an estimate of how much vaccination should be done to accelerate mobilization. Thus, we dare to start this transfer.

The land to be built for IKN development in East Kalimantan is also populated land and does not need to be taken over by the government. In fact, people who still live in IKN land should feel the positive impact of IKN relocation. So that the villages on the land will be repaired and become part of the nation’s capital city.

The public also needs to know that if DKI Jakarta is no longer the capital city of Indonesia, it does not mean that the intensity of business in Jakarta will be sluggish, because the relocation of the capital city is only for executive, legislative and judicial government affairs, while business affairs remain in Jakarta.

University of Indonesia (UI) Urban Sociologist Paulu Wirutomo said, if a city is approaching density points that are already very dangerous for people’s lives, then it is better to find ways to spread it so that a city can re-develop. According to him, the most effective population distribution strategy is relocating the capital city.

Moving the location of the capital city will certainly give rise to pros and cons, but this plan is one solution to reduce the population density which is centralized on the island of Java, especially Jakarta. So that equitable development can be realized.

Health Protocols Protect Citizens from the New Variant of Covid-19