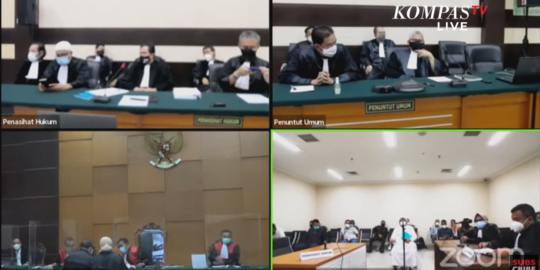 Rizieq’s Attorney Triggered a Fuss in the Trial

Rizieq Shihab and Tim Attorney huku mnya always create chaos in the courtroom which is shown by the efforts of protests on a high note . This phenomenon shows the lack of goodwill from the defendant in undergoing the trial.

When it started, members of Rizieq’s legal team, who could not enter the courtroom, tried to attack the boss. The police apparatus anticipated this action by constructing a posse to block any attorney from entering the East Jakarta District Court.

Meanwhile, a member of Habib Rizieq’s legal team, Munarman, was found to have shown an unpleasant attitude towards the public prosecutor in the East Jakarta district court room.

In the courtroom, Munarman asked the prosecutor to be silent, because he was expressing his opinion regarding Rizieq’s request for the trial to be held offline or offline.

This incident occurred when Munarman expressed his view that today’s trial needs to be suspended or postponed first. The reason is, Rizieq as the defendant stated that he rejected the trial which was held online.

Munarman shouted saying “Silent Brother”. Seeing the rising tension, Chairman of the Panel of Judges Suparman Nyompa mediated the debate. Suparman asked Munarman to be calmer in facing this polemic.

Previously, in the exception reading trial for the Petamburan crowd case defendant, Rizieq Shihab asked that the trial be held offline, not virtually. He wanted to read the exception in the courtroom of the East Jakarta District Court (PN) (JakTim), not from the Detention Center (Rutan) of the Police Criminal Investigation Unit.

Indriyanto said that the attitude shown by Habib was actually detrimental to Rizieq. Because Habib Rizieq would be interpreted as having relinquished all rights to defend himself legally.

Habib Rizieq also seemed to be dramatized, where before the indictment was read out, there was a debate between Habib Rizieq and the public prosecutor in the hallway of the Bareskrim Police detention center.

Habib Rizieq revealed the reason why he refused to attend online audits . There were 3 reasons that he conveyed, where HRS was worried about being sabotaged, did not communicate smoothly with lawyers and harmed himself as a defendant.

This former FPI leader, was charged and declared to have incited the community in violating health quarantine regulations in the case of the Maulid Nabih Muhammad SAW event and his daughter’s wedding in petamburan.

Then, Rizieq has been charged with violating health quarantine rules by attending an event at the Islamic Boarding School for Agrocultural Markaz, Megamendung, Puncak, Bogor Regency on November 13, 2020. In addition, Habib Rizieq has also obstructed the implementation of health quarantine.

It seems that when Habib Rizieq acts up in Indonesia, the problem is getting worse. Coupled with the language style that is far from being peaceful and calm.

In order for matters not to get worse, the Panel of Judges at the East Jakarta District Court finally granted the defendant Habib Rizieq’s request to be able to attend the trial offline.

This judge’s decision came out after the defendant’s attorney submitted a letter of request to the panel of judges so that the trial could be held offline or face-to-face.

As a result of this petition, Habib Rizieq got angry at the trial and ignored the panel of judges.

The act of getting angry at trial and neglecting the panel of judges, of course, only drains energy.

The debate in the trial showed that Rizieq’s attorney and the prosecutor. Like oil and water which are difficult to mix.

In order to stop the debate which made the atmosphere even worse, the judge then stated that he would accommodate the input submitted by both the defendant and the black and white party.

The FPI group, which likes to curse and commit acts of violence, is an old song from FPI, so that the crowd case in the petamburan is proof that protocol violators must get firm action.