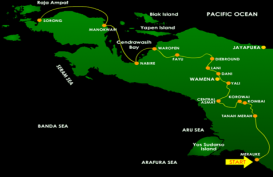 Special autonomy is a program for the Papuan people, where they get billions of funds from the government. The money was used to build infrastructure and channeled into other fields as well. Such as education, health, economy, religion, etc. So that the Papuan people will be more prosperous.

Papua and West Papua are 2 provinces with great potential, because they have natural beauty and rich agricultural products. However, there are some people on Earth of Paradise who live simply. Even though the government has tried to make all Indonesian citizens prosperous, including those living in Papua.

In order to overcome the economic gap between Java and Papua, since 2001 special autonomy was rolled out. Special Autonomy is a special program because it only exists in Bumi Cendrawasih and Nanggroe Aceh Darussalam. In Papua, the special autonomy fund volume 2 will be increased again, so that the local government will receive more than 1 billion rupiah.

Why does Papua advance stimulus with money? This is because the special autonomy budget is used as fuel to modernize Papua. Don’t let the Cendrawasih Earth get a bad stereotype that the area is still primitive and far from progress. Because the reality is not like that. Even in Mimika the situation is similar to San Francisco, because the area is so advanced.

Otsus volume 2 which will start in 2021 will prove that the government is committed to seriously developing Papua. Because to continue the autonomy mission volume 1, for the sake of the prosperity of the Papuan people. If the Special Autonomy Volume 1 focuses on infrastructure development such as the Youtefa Bridge and Trans Papua Road, then the Special Autonomy Volume 2 focuses on development in other fields, such as health and education.

Evaluation before commencement of special autonomy volume 2 is very important so that this program runs well. The DPR member from the West Papua Electoral District, Jimmy Demanus Inje, stated that there had been a Presidential Letter regarding the discussion of the revision of Law Number 2001 of 2001 concerning Papua’s special autonomy . He hopes that his revision will focus on authority, not just an increase in the special autonomy fund.

Jimmy added that the authority in question is to regulate or manage human resources in Papua by themselves. Both in the oil and gas, marine and forest sectors. This is a solution to the problems of the people on Earth of Cendrawasih. He also wants representatives of the Papuan people to be allowed to participate in the revision of special autonomy. In that sense, he wanted the voice of civilians to be heard more by the government.

Jimmy’s proposal is still being considered by the government. However, DPR members from the Papua and West Papua electoral districts should not forget about other facilities provided by the central government. Namely, the rights of indigenous Papuans were given more than those in the New Order or the Old Order.

In the past, the Governor of Papua (formerly: Irian Jaya) was usually held by retired military personnel and may be of any ethnicity, then since the beginning of the Special Autonomy in 2001, native Papuans had to hold the position. Apart from the governor, the deputy governor, mayor and deputy mayor must be held by OAP (native Papuans), so that they can develop their own regions.

This policy makes the people happy because the local government can build their regions better. With such a large special autonomy fund, a representative hospital, complete with medical equipment and complete medical personnel, can be built. There are also schools with complete libraries and teachers who are committed to educating the nation’s children.

This is clear evidence that the central government is very concerned about the Papuan people. Because everything is thought of, from infrastructure, education facilities, health, to scholarships. Everything is given to the people of Papua, so that they will be more prosperous.

Otsus volume 2 must be continued because this program shows the seriousness of the government in its efforts to advance Papua. Thanks to the special autonomy funds, Papuan children get scholarships so that they become smarter. They also study in schools that have complete facilities.

) * the author is a Papuan student living in Bandung