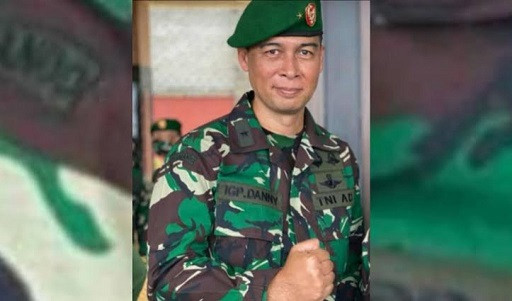 THE NATION OF THE KUSUMA HEROES IN PAPUA

The Armed Criminal Group (KKB) in Papua is increasingly brutal and heinous . The KKB’s outrageous action resulted in the death of the Regional BIN (BINDA) Kep. Brigadier General I Putu Danny Nugraha Karya in Beoga District, Puncak Papua Regency on Sunday (25/4) . The KKB’s atrocities and savagery are proof that they are a dangerous terrorist group that deserves to be eradicated from the Republic of Indonesia .

The Commander of the XVII / Cendrawasih Regional Military Command, Maj. Gen. Ignatius Yogo Triyono, confirmed this, that the incident was at 15.30 WIT . The information obtained was that Brigadier General I Putu Danny Nugraha Karya died when he was visiting the location of the arson that occurred in Beoga village , where he was shot by KKB and died instantly .

It is planned that the body of Brigadier General I Putu Danny Nugraha Karya will be evacuated and transferred to Timika Papua on Monday (26/4). Let us pray that the process of evacuating the bodies will run well and all the brutal acts carried out by the KKB can be crushed by the security forces .

Events shooting of Brigadier Putu Karya Nugraha Danny is obviously adds to the long list of acts of an criminals from KKB, and it is fitting this CLA at the entrance late in the list of terrorist groups. This incident seriously hurt the spirit of humanity in Indonesia, where life seems to be something that is easily snatched away.

Brigadier General I Putu Danny Nugraha Karya deserves the honor of being a Hero of the Nation Kusuma, for his services, courage and dedication in carrying out his duties even though his life is at stake. The enthusiasm and courage of I Putu Danny Nugraha Karya will continue to live and have a place in the hearts of the Indonesian people. His struggle will never end, especially in upholding the banners of truth.

On the other hand, people also need to know that the military and police will continue to work in total in maintaining the integrity of the Republic of various forms of early criminal, s e paratis, even terrorists. The apparatus will not step back an inch in fighting against various forms of violence, crime, and criminal acts that injure human values.

May God Almighty protect us all, and Indonesia back on its position as a peaceful country that puts the value of the Deity, Humanity, Unity, Tolerance in Plur eyebrows, as well as Justice upheld as mandated by Pancasila as statt s fundamental norm of the Indonesian state.

) * The author is a graduate student of UPI Bandung

Many Role Model Clerics Who Can Be Followed