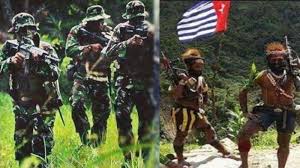 The armed criminal group (KKB) has always troubled the Papuan people. They deserve to be eradicated because they took peace on Earth of Paradise and terrorized them in various ways. The community is also antipathy to the KKB, because they have gone far beyond their limits, recklessly taking the lives of their own tribesmen.

Papua often appears in the news, unfortunately what is highlighted is the rebellion of an armed criminal group, a gang that is part of OP M. They always commit violence in Papua and use firearms as a difference to frighten the community. Even though the senpi is clearly illegal and they have no right to use it, because they do not have an official permit.

KKB violence is getting worse and they even dare to use civilians for life shields, when there is a shootout with members of the TNI. The authorities tried hard to get them caught and disperse, so that peace in Papua would remain eternal and there would be no further victims . A. They have committed various crimes so that they must be arrested.

The KKB became even more pressed when the authorities took control of one of their bases in the Yugura area, Nuda. The KKB troops led by Egianus Kogoya had lost their freedom to attack. This was said by the Head of the Newangkawi Public Relations Task Force Kombes M Iqbal Alqudussy.

The success of the apparatus to control the KKB headquarters is a major achievement. Because the KKB troops were shrinking and confused about where to hide again. They have limited space to move when their headquarters is occupied by officers. Gradually, all of their members will be caught and finally the KKB can disappear from the Earth of Paradise.

Kombes Iqbal continued, in fact many KKB members and sympathizers have surrendered to what they were and returned to the Republic of Indonesia. In a sense, they are actually tired of guerrilla for decades and are aware of their mistakes. That Papuan independence is impossible and the Indonesian government has been very kind to all citizens of Cend Rawasih.

When a KKB member repents, he doesn’t need to be afraid of being jailed. Because he had surrendered and promised to be loyal to Indonesia. It is precisely when he willingly surrenders himself to be a very important informant. So the apparatus will know where the KKB headquarters are and who are the figures behind their ferocity.

Eradicating KKB is mandatory, because they have taken various actions beyond their limits. First, KKB once held pilots and passengers hostage, and also threatened to prevent them from transporting members of the TNI or police. The passengers on the plane were also suspected of being officers, even though they were ordinary civilians.

Second, the KKB held too frequent firefights. The victims ranged from state-owned cars carrying logistics, to civilians who lost their lives, to officers who were shot after carrying out morning worship. all their atrocities made the KKB even more hated for shooting their own people, and they accused the victim of being apart, even though it was not .

To eradicate KKB, it is necessary to carry out more intensive field operations. Not only in conflict-prone areas such as Intan Jaya, but also in other areas from Jayapura, Fakfak, to Merauke. There is still potential for chaos caused by KKB, therefore it is better if the number of officers on guard continues to be increased.

Eradicating KKB must be carried out in order to create peace in Papua. The people of Cendrawasih Earth certainly do not want their lives to be trapped in fear due to the terror of the KKB. They must be disbanded to their roots, so that there is no more news about the KKB atrocities in Papua.

#The Papuan KKB Deserves to be Eradicated
50
Share FacebookTwitterGoogle+WhatsAppEmailTelegramLINEBlackBerryPrint