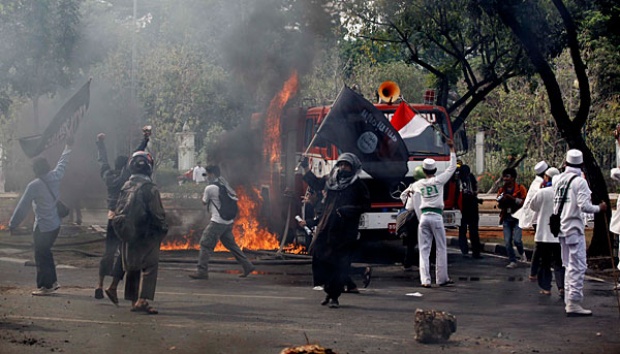 By: Rahmat Aldebaran) *
If FPI often makes provocative sentences, is there any possibility that FPI members are involved in terrorist networks? This of course needs to be thoroughly investigated, because apparently there are several terrorist members who claim to be members of the FPI.
The leader of the Task Force Team for the Pancasila Guard Advocates Forum (FAPP), Petrus Selestinus, asked Densus 88 to ban and detain former Secretary General of the Islamic Defenders Front (FPI) Munarman.
This is because Munarman is strongly suspected of having been present when a number of FPI members or former FPI members were inducted into the ISIS terrorist network on Jalan Sungai Limboto Makassar, South Sulawesi in 2015.
According to him, there needs to be a thorough investigation and investigation of all FPI activities in the past. Petrus assessed that during the last 10 years, the lecture of former FPI frontman Rizieq Shihab contained a narrative of threats of violence that created an atmosphere of terror or fear among the public.
Therefore, it is very legal if there are Habib Rizieq and Munarman, it is necessary to carry out investigations and investigations using the instrument of Law Number 5 of 2018 concerning the Eradication of Criminal Acts of Terrorism.
During the last 10 years, Habib Rizieq’s lectures in da’wah pulpits have always spread hatred and terror that frighten the wider community which is coherent with the suspected terrorist acts of FPI members.
The suspected terrorist of the Jamaah Ansharut Daulah (JAD) network, Ahmad Aulia, admitted that he had committed allegiance to the ISIS group led by Abu Bakr Al-Baghdadi. Ahmad, who is said to be the police, is also a member of the FPI, was arrested on January 6.
He said that at that time he took pledge with hundreds of FPI sympathizers and troops at the FPI Makassar headquarters on Jalan Sungai Limboto. According to him, this allegiance was attended by several FPI officials, including Munarman. Ahmad admitted that he took allegiance with 100 FPI sympathizers and troops. He took baiat and was attended by Munarman as Ustaz Basri who led the allegiance at that time.
After taking the pledge, he admitted that he routinely participated in the taklim activities of the Makassar FPI. Confirmed separately, the former Secretary of FPI South Sulawesi (Sulsel), Agus Salim Syam, denied that the former FPI headquarters on Jalan Sungai Limboto were used as a place of taking allegiance. Previously, the police also confirmed that dozens of suspected terrorists from the JAD network from Makassar who were to be transferred to Jakarta were active members of the FPI forbidden organization.
The dozens of suspects will undergo further investigations in Jakarta by the Police’s Densus 88 Anti-terror investigator. They are scheduled to arrive at Soekarno Hatta Airport. It should be noted that Densus 88 Police Headquarters arrested 26 suspected terrorists in Makassar and Gorontalo. Of that number, 19 suspected terrorists were FPI members.
Karopenmas DivHuas Polri Brig. Gen. Rusdi Hartono said the terrorist group was arrested in a number of places in Makassar and Gorontalo, South Sulawesi. In total there were 26 terrorism suspects from Gorontali and 19 from Makassar. Three of them are women.
Political observer and lecturer at the University of Indonesia Ade Armando has an opinion regarding the existence of mass organizations led by Habib Rizieq. He considers that FPI is not an ISIS-affiliated organization. However, FPI is a mass organization that has a direction as a terrorist group. This is because, so far, FPI has often committed crimes and a number of acts of terror against minority groups in the country. On that occasion, Ade Armando also explained the meaning of acts of terrorism, namely a group of people who often commit violence against civilians for the realization of their group’s ideological political goals. Like ISIS, Al Qaeda, Jemaah Islamiyah, OPM etc.
Although not as violent as ISIS in carrying out attacks on civilians in Iraq and Syria, this kind of action is what he assesses to a certain degree not much different from the strong attitude of the FPI which often unsettles the public.
It is clear that the FPI uses violence to attack civilians which it considers ideologically contradicting. The track record of acts of violence carried out by FPI is still being recorded until now, the government seems to have been cheated when it finds out that there are FPI members who admit that they are part of a terrorist network, of course disbandment of FPI is what should have been done.
) * The author is a citizen living in Bandung

Vaccinations: Efforts to Get Rid of the Covid-19 Pandemic