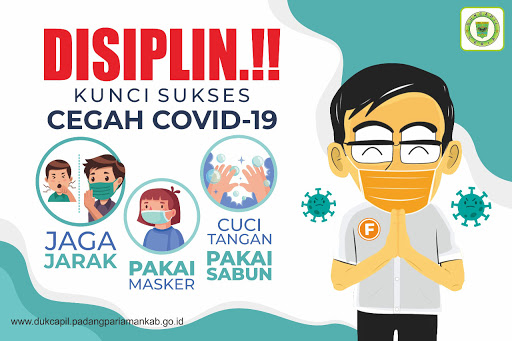 The Health Protocol is one of the main keys to suppress the transmission of Covid-19. The community also supports the government in giving strict sanctions to violators of the Prokes .

The government will implement law enforcement to discipline the public so that they carry out strict health protocols. Coordinating Minister for the Economy Airlangga Hartarto in a press conference said it was important to improve public discipline and law enforcement.

The man who also serves as Chair of the Covid-19 Handling and National Economic Recovery Committee (KPCPEN), involving law enforcement elements such as Satpol PP, Babinsa, to the TNI/Polri to make the public more aware of the importance of maintaining health protocols.

This is done not only for law enforcement but also for pressing and the government also certainly pays attention to the community environment through micro operations and will be evaluated dynamically.

The involvement of law enforcement officers will target 98 regions in Indonesia with relatively high positive cases of the corona virus, such as DKI Jakarta, West Java, East Java, Central Java and Jogjakarta.

The Covid-19 Handling Task Force announced that the number of positive corona patients in Indonesia had increased again by 10,379 people on Tuesday 2/2/2021, bringing the total cases to 1,099,687 people.

If the numbers say so, it means that health protocols must still be encouraged, otherwise, of course, the consequences of sanctions must be accepted.

On a different occasion, a BRI KCP Makassar Sentral security guard showed his firm attitude towards visitors who were not disciplined in implementing health protocols.

In the 2-minute video, a security guard wearing a mask and face shield is seen preventing customers from entering the office. For not wearing a mask.

Even though the customer received a bad response and shouted at him, the security guard did not open the door and asked the man who claimed to be the leader of the NGO to look for a mask if he wanted to enter the bank.

Netizens also support the security guard with positive comments as expressed by the owner of the sarwan_agustrians account, salute to the security guard, it is clear that the area is required to wear a mask, the rules are the rules/

The man’s action went viral after his arrogance to the BRI security guard went viral on social media. The man is known to have the initials AR, who is the chairman of the DPD Cross Hunter Justice (LPK).

In the video, the security guard wearing a faceshield and mask continues to remind the man to wear a mask before entering the ATM. This is in accordance with the Covid-19 handling procedures recommended by the government.

However, AR refused, the reason was forgotten and only for a moment. He also admitted that he was encouraged so that he did not accept the security guard’s treatment.

Sanctions given to visitors are in the form of verbal warnings, physical actions such as push-ups and social sanctions for singing the compulsory song in public. After that, the team gave advice and distributed masks to violators of health protocols.

Most of the business managers have also complied with the Covid-19 health protocol by socializing the rules regarding the discipline of health protocols such as the use of masks, providing hand washing places and placing crosses, in order to regulate the interaction distance between visitors.

Meanwhile, the Head of the Department of Epidemiology, Faculty of Public Health, University of Indonesia, Tri Yunis Miko, assessed that the government should equalize social work sanctions with the amount of administrative fines so that people obey health protocols.

According to him, the most important thing to make people obey health protocols is education. Because without education, according to him, it is difficult for people to obey the rules. In addition, the law must also be enforced for anyone who violates it.

The Central Statistics Agency (BPS) in its survey noted a number of reasons people did not comply with the Covid-19 protocol. Where as many as 55 percent of respondents used the absence of sanctions as their reason for not implementing the Covid-19 health protocol.

Strict sanctions are needed to provide a deterrent effect, besides that education related to health protocols must also continue to be encouraged because a person’s knowledge will affect his attitude and behavior as well. We all certainly hope that the pandemic will end soon , of course, this hope must be followed by our efforts in implementing health protocols.