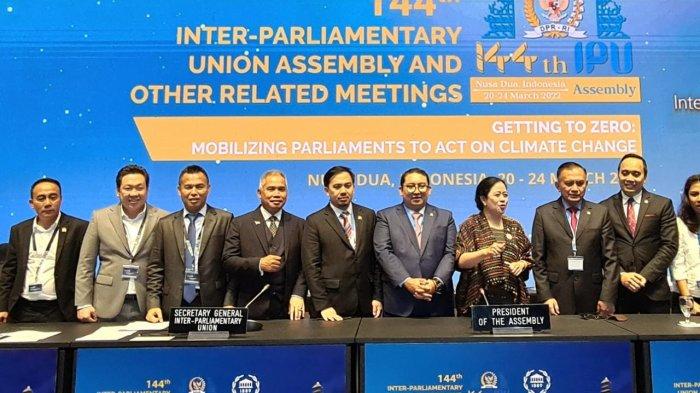 The 144th IPU session has officially closed. The holding of the session between the world’s parliaments was flooded with praise for being able to run safely and smoothly even though it was carried out during the Covid-19 pandemic.

Finally, the 144th Inter-Parliamentary Union (IPU) session which was held in Nusa Dua, Bali from 20 to 24 March 2022, has run smoothly. Of course, the participation of all parties for the smooth running of the event cannot be ruled out. Even to be able to guarantee the smooth running of the event, several related parties immediately rushed to the venue where the activity was carried out.

Indonesia as the host must be able to maintain its good name and positive image in the eyes of the world, for that the BKSAP Team which accompanies Puan Maharani as Chair of the Indonesian House of Representatives and Lodewijk F. Paulus as Deputy Chair of the Indonesian House of Representatives Coordinator for Political and Security Sector (Korpolkam) immediately visited the location. Not only reviewing it, but there was also a direct coordination meeting to prepare for the smooth running of the event from a long time ago.

Various relevant stakeholders attended the coordination meeting and discussed how the implementation flow could ensure that all the 144th IPU processes ran smoothly. Puan Maharani immediately gave instructions so that starting from the arrival of the trial participants at the airport, until the airport was about to go to the hotel where they were staying, everything had been carefully prepared.

It is undeniable that Indonesia’s good name is at stake in this activity, we also get a big award for successfully making the biggest international event of the Indonesian House of Representatives in 2022 possible. In the future, it is hoped that after the Parliamentary delegates know Indonesia’s potential, we can be much more convincing about our name so that it will also affect the running of the economy through tourism on the Island of the Gods.

All the preparations that have been made by all parties deserve our highest appreciation, because they don’t just stop at just holding coordination meetings but also carry out a series of dress rehearsals and testing to ensure all smoothness is under control and ensure the event goes according to plan.

Because the implementation of the 144th IPU is still in a state of the COVID-19 pandemic, but it certainly doesn’t prevent all aspects from running smoothly, because we have in fact succeeded in proving in the eyes of the world that Indonesia is able to become one of the pilot countries for handling the pandemic quite well. This fact is undeniable with the various boosters that have been shown, ranging from evenly distributed vaccinations to the provision of many booster vaccines.

Even a proud appreciation was also directly expressed by Indra Iskandar as the Secretary General of the DPR when he went directly to observe how the 144th IPU session took place at the Bali International Convention Center. According to him, everything had been prepared long ago with great care and detail.

The various notes and inputs that have been expressed by Puan Maharani during the preparation of the trial have also proven to be very effective and can make all parties involved in the trial satisfied. It was proven by the enthusiasm of the Parliament delegates from various countries when attending the event until the discussion ran smoothly.

Another compliment also came directly from Pacheco as the President of the IPU. He said that the readiness that had been carried out by Indonesia so far was very good. Several points were mentioned about how the implementation of our very strict health protocols, then how the officers were very friendly at entertaining the guests to the good enthusiasm that was shown by the Balinese people to welcome the 144th IPU.

All of these appreciations can indeed be said to be worthy of acceptance by Indonesia, which has indeed succeeded in bringing world events to become very good as hosts. Everything is also the result of cooperation based on the application of the values ​​of gotong royong, which has been the motto of our ancestors.