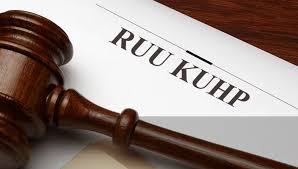 The Draft Criminal Code (RKUHP) is made so that people’s lives can run well and comply with criminal law.

Indonesia is located in Southeast Asia and has always been known as a country that holds close to eastern customs. Although the world has changed and there has been a cultural transformation, and made countries in Southeast Asia have different moral values, Indonesia remains as it used to be. In a sense, the people are very polite and do not turn into immoral, even though they are free to access information from other countries.

However, there is a small part of society that turns out to change and forget the old norms on the grounds that they are outdated. Though the rules and norms are intended so that life goes well. Moral values ​​must be maintained even though Indonesia is already in the era of information technology. Don’t let a small part of the people who deviate from it actually spread their teachings and mislead the public, and this is prohibited by the RKUHP.

In Article 418 of the RKUHP it is explained that perpetrators of obscene acts in public will be sentenced to 1 year and 6 months in prison. The penalty can be increased by 9 months when this immoral activity is carried out by force. This act also includes obscenity against those of the same sex alias LGBT (lesbian, Gay, Bisexual, and Transgender).

With a strict Article and the threat of imprisonment like this, it is hoped that there will be no indecent things that are shown in public. Don’t let anyone openly show off adult scenes, especially in front of small children. Children who are still innocent should be protected from such bad thoughts and actions. The morals of the people must be corrected again and Indonesia must hold a strong eastern culture.

The RKUHP is a future law that strictly prohibits adultery and obscenity. Moreover, it displays a show that contains stories about same-sex relationships. Stories like this are certainly disgusting, but for a few people who support LGBT they are praised. Don’t let the world turn upside down and people’s morale to be damaged because of their actions.

Perpetrators of obscenity and LGBT can give up and fear being entangled in the RKUHP and imprisoned, especially in prison they can be beaten up by other inmates. Not only social punishment, but also confinement and mental suffering because of his very immoral actions.

If the rainbow people only get social punishment then it will be very less because they honestly don’t care when they are ostracized by society. When tired then stay away abroad. However, if there is a threat of punishment from the RKUHP, they can be immediately arrested and cannot run away again.

The RKUHP is very important to be ratified so that moral values ​​do not decline, and there is omission of indecent behavior displayed by the rainbow people. Worse, when there is omission, it can spread to more Indonesian citizens in Indonesia. The reason is because they really like to make friends and become new prey. Not all LGBT perpetrators are contaminated from childhood, but some are infected by their partners.

This kind of deviant behavior will be eradicated by the RKUHP. Moreover, LGBT has started to openly show that he likes the same sex, both in the real world and in cyberspace. They show photos and videos ‘intimate’ but very immoral. If someone uploads content like that on social media, then he will be caught in the RKUHP and serve a prison sentence

The RKUHP is the moral savior of the Indonesian people. Do not allow the deviant behavior shown on social media to make people think that it is normal. Whereas LGBT is clearly abnormal and destroys the moral values ​​of society. Perpetrators of deviant acts must be corrected and arrested.

The RKUHP is a draft law that can save people’s moral values ​​and restore the norms of decency in Indonesia. People still hold fast to eastern culture and don’t let them become liberal and pro to the rainbow people. The RKUHP prevents their spread, so that there are no more victims, especially children.

)* the author is a contributor to literacy activists in Banyumas

Appreciating the Handling of Covid-19