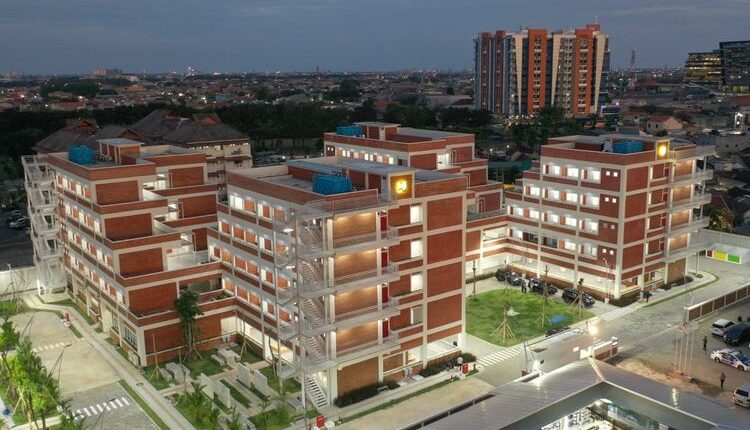 Support the Development of AMN, GMKI: As a Means of Uniting the Nation

The construction of the Surabaya Archipelago Student Dormitory (AMN) has been completed, its construction was carried out by the Ministry of Public Works and Public Housing (PUPR) and work began on September 17, 2021 utilizing land owned by the East Java Provincial Government covering an area of 9,975 square meters.

General Chairperson of the Indonesian Christian Student Movement Center ( Ketum PP GMKI), Jefri Gultom said that his party supports the development of AMN which according to him can unite students from various ethnicities, cultures and religions.

“We support the development of AMN as a means of uniting students from various ethnicities, languages, cultures and religions who come from various regions in Indonesia and from various universities,” said Jefri.

Jefri also invited all students who live in AMN, especially students from Papua, to continue to be able to establish close relationships and collaborate in advancing the nation through AMN.

“There are already 6 points that will soon be operated, therefore let’s welcome them well. Especially for fellow students from Papua, so that we can collaborate with fellow Indonesians,” said Jefri.

Jefri added that the purpose of developing AMN is a forum to unite students from various ethnicities, languages, cultures and religions who come from various regions in Indonesia and from various universities.

“The aim of AMN is to serve as a coaching platform to strengthen unity and integrity for the younger generation at the tertiary level. Of course, this must be welcomed by students from Papua who plan to carry out their studies, in addition to establishing brotherhood among fellow dormitory residents from students who have different backgrounds and come from all over Indonesia, “explained Jefri Gultom.

Presidential Decree Number 106 of 2021, the AMN occupancy quota as referred to in Article 8 includes Original Papuan Students at most around 40%. This can be an opportunity for students from Papua to be able to introduce themselves as outstanding students.

“AMN will be an extraordinary forum for our friends and family from the land of Papua in particular, to introduce themselves as students who excel and are good academically to all ethnicities, religions, races and groups throughout Indonesia,” concluded Jefri Gultom.

Meanwhile, the Governor of East Java, Khofifah Indar Parawansa , said that AMN is a training ground for prospective national leaders who have the character of Bhinneka Tunggal Ika.

“This AMN is the first in Indonesia and has become a miniature for formulating prospective leaders who have an archipelago perspective and have the character of Bhinneka Tunggal Ika,” he said.

The State Intelligence Agency (BIN) was specifically assigned by President Joko Widodo, as a catalyst in order to realize the development of AMN in a number of cities in the country.

BIN’s efforts and hard work in embracing a number of related Ministries and Agencies have yielded successful results, namely the establishment of the Archipelago Student Dormitory (AMN) as a forum for realizing Bhinneka Tunggal Ika among students. Apart from Surabaya, AMN is planned to be built in 6 cities in 5 other cities/regencies, namely in Surabaya, Makassar, Minahasa, Bantul, South Jakarta, and Malang.

The government also plans to build AMN in various other cities