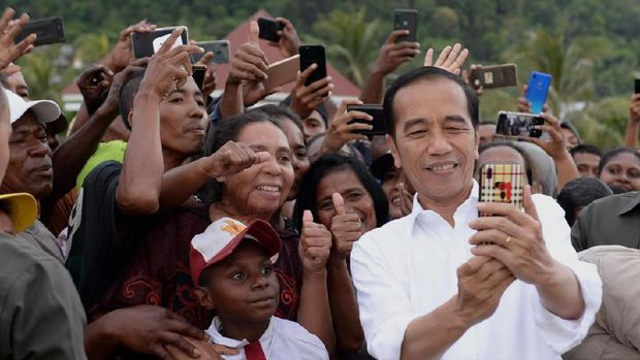 Appreciate the Handling of Conflict in Papua

The government continues to optimize conflict resolution in Papua, both through law enforcement and humanitarian approaches. The community also appreciates the efforts to handle the conflict which is expected to end the violence in Papua soon.

Conflict in Papua is a serious problem, this is because the conflict in Papua has an impact on the destruction of public facilities to the loss of civilian lives, so that the TNI-Polri security forces must have a strategy to deal with conflicts on Earth Cenderawasih.

Asops Chief of the National Police, Inspector General Imam Sugianto said the National Police are currently preparing the best handling pattern with the TNI to deal with the conflict in Papua. This is because the candidate for the Commander of the Indonesian National Armed Forces, General Andika Perkasa, does not use a war approach in dealing with conflicts on Earth of Cenderawasih.

Currently, he said, the TNI and Polri were involved in Operation Nemangkawi which ended in December 2021. Until the end of the year, the TNI-Polri were still using the same method to crush problems in Papua, such as terrorist armed criminal groups (KKB). Usually, the Nemangkawi Operation will be extended every 3 months. There he said that the new pattern of handling in early January 2022 during the operation period of the task force was extended.

Previously, Deputy Speaker of the Indonesian House of Representatives Lodewijk Fredrich Paulus said Andika plans to no longer use a war approach in dealing with the Papua issue. He mentioned that Andika would take a soft approach. Andika is said to be resolving the conflict in Papua by utilizing territorial development operations. He said the TNI would prioritize communication.

Lodewijk said that Andika’s mainstay was not combat units, but territorial units that were deployed, starting from Babinsa, Tamtama and Kodim and that was what was strengthened. Lodewijk claims Andika Perkasa has started preparing a territorial unit in Papua. The soldiers were specially selected beforehand.

Meanwhile, Indonesian Vice President Ma’ruf Amin hopes that General Andika can continue the steps taken by the previous TNI Commander in building security conduciveness in Papua. With a better approach, it is hoped that the intensity of security disturbances in Papua will decrease. Ma’ruf Amin believes that the new Panglima has concepts that may have a better approach. That’s what we hope for.

Ma’ruf also emphasized that the TNI Commander Marshal Hadi had also implemented good concepts and steps. But based on what has been done, he hopes that there will be better strategic steps in dealing with security issues in Papua.

Vice President Ma’ruf Amin also said that Andika would be able to implement more humane steps while maintaining the spirit of protecting and upholding human rights. He also said that currently development in Papua requires harmonization in the fields of welfare and security.

Meanwhile, Papuan Human Rights (HAM) activists hope that in the future the TNI can provide more protection for civilians there. This was stated by the Director of the Democratic Alliance for Papua (ALDP) Latifa Anum Siregar in responding to the DPR’s decision to unanimously approve General Andika Perkasa as TNI Commander in the Plenary Meeting.

The director of the Papuan Justice and Human Integrity Foundation, Theo Hesegem, expressed the same hope. He wants the TNI to prioritize dialogue rather than militarism to resolve the Papuan conflict. Hesegem also advised General Andika Perkasa to prioritize a humanist approach by involving people with different views, the church, NGOs and traditional councils.

On a different occasion, the Head of Komnas HAM Papua Representative, Frits Ramandey hoped for a new policy to support the Police in resolving armed conflicts in Papua. Frits said that the figure of General Andika Perkasa had been approved by the Indonesian House of Representatives as the Commander of the Indonesian Armed Forces. And he must be willing to build communication with all other stakeholders in Papua.

Previously, it was also reported that a member of Commission I of the DPR from the Golkar Party faction, Bobby Adhityo Rizaldi, said that the issue of Papua had become one of the focuses in the fit and proper test of TNI general Andika Perkasa as a candidate for TNI Commander.

Andika told this in private after the deepening of her vision and mission during the Public Hearing Meeting (RDPU). According to Bobby, Andika ensured that security in Papua would be carried out in a more humane manner by winning hearts and minds.

The steps that will be taken by Andika Perkasa show that conflict handling does not have to be with the trigger of a weapon, but a humanistic communication approach so as to minimize gun contact.

The Role of Moderate Religious Leaders in Countering Radicalism