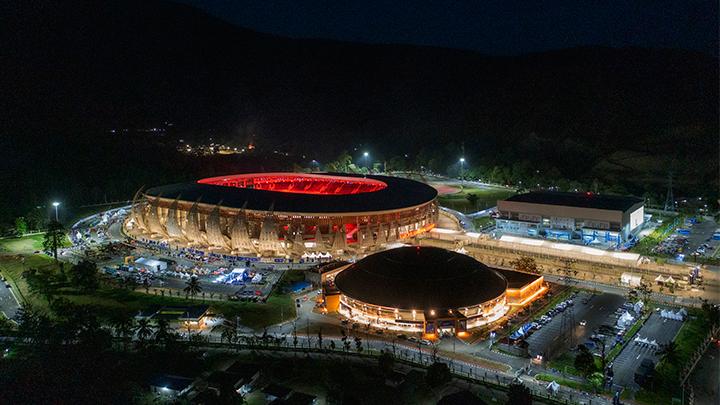 President Jokowi officially opened the XX National Sports Week (PON) on October 2, 2021. In addition to responding positively to the opening ceremony of PON XX, a number of contingents and the public also appreciated the international standard PON XX venue.

Rildo Ananda Anwar as the General Chair of the Central Management (PP) of the All-Indonesian Tennis Association (PELTI), said that the tennis arena of the XX Papua National Sports Week (PON) at the Sian Soor Tennis Center in the Jayapura Mayor’s office yard, has met international standards.

A number of athletes also praised the Sian Soor Tennis Center, one of which was the 2019 SEA Games gold medal winner Aldila Sutjiadi who judged that the arena was worthy of hosting an international tournament.

Young tennis player Priska Madelyn Nugroho, who has just finished her Junior Grand Slam tour in Europe, even compared this tennis arena to the arena to compete in the prestigious US OPEN tournament.

This was conveyed by Velix Wanggai as General Chair of the Executive Board of the All-Indonesian Roller Skate Sports Association (Perserosi).

On a different occasion, Minister of Public Works and Public Housing (PUPR) Basuki Hadimuljono said there were as many as seven venues for the National Sports Week (PON) in Papua province which would be inaugurated by President Joko Widodo (Jokowi).

Meanwhile, the international standard PON XX rock climbing venue in Mimika Regency has reached 94% and is planned to be completed in June or July.

Then the Cricket venue and the Hockey Field (Indoor and Outdoor) in Kampung Doyo Baru, Waibu District. Furthermore, there are three additional venues, namely the Roller Skate, Rowing and Archery arenas.

Basuki expressed his gratitude to all Balai within the Ministry of PUPR in Papua Province who have worked hard with partners in completing the construction of these various infrastructures.

In addition to the PON venue, there are other infrastructures that have been completed and are officially operating.
The infrastructure is 15 towers of flats (rusun) which are used as residences for athletes and officials.

Basuki emphasized that the achievement of the completion of the Papua PON facilities and infrastructure could not be realized from the work of one person or an organizational unit, but rather a collaboration involving many parties.
He emphasized to all employees within the Ministry of PUPR to maintain credibility and trust in carrying out the mandate of infrastructure development.

The international community needs to know that Papua is hosting the XX PON with various exercises.
President Joko Widodo had reminded that the PON in Papua was not just a sports competition. However, PON is a common arena to celebrate diversity, strengthen the spirit of brotherhood and an arena to strengthen unity and integrity.

The facilities for PON XX Papua, which have international standards, are certainly a source of pride for the Indonesian people, especially the Papuan people, so it is very possible if later the international championship competition can be held in Papua.