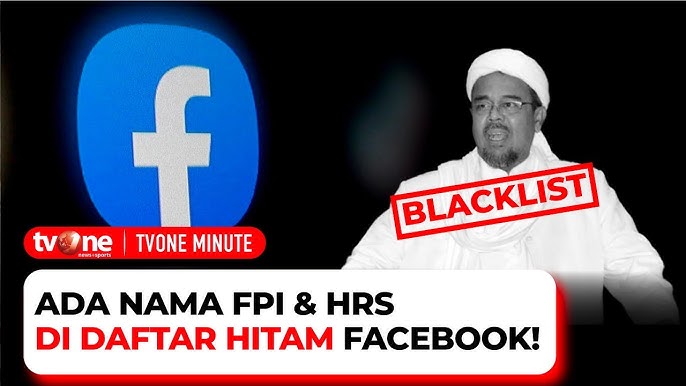 Facebook has set a blacklist for organizations and individuals deemed dangerous. One of these figures and organizations is the Islamic Defenders Front (FPI) and Rizieq Shihab.

The Facebook blacklist was first revealed by the US media The Intercept. The media actually contains about 4000 names of people and organizations in the world that are considered dangerous by Facebook.

Until now, Facebook has not provided a reason why it compiled the list and what considerations are used by Mark Zuckerberg’s social media company.

The 100-page document was rearranged by The Intercept based on Facebook’s original list. In it organizations and people are arranged in a structure of names, categories, areas where people/organizations are, type of organization, affiliations and parties that define the person/organization in a dangerous category.

We need to know, that Facebiik has for years banned its users from speaking freely about people and groups that are said to be promoting violence. The restrictions appear to be traced back to 2012, when it faced growing concern in congress and the United Nations about online terrorist recruitment.

Facebook then added a list of prohibitions to its community standards under the “organizations with a record of terrorist or violent criminal activity” column. Brian Fishman, Facebook’s director of policy for counterterrorism and dangerous organizations, said the company kept the list secret because it was a hostile space.

Brian added, Facebook does not want terrorists, hate groups or criminal organizations to exist on the Facebook social media platform. That’s why it bans them and removes content that praises, represents or supports them.

Facebook itself has a team of 350 specialists at Facebook who are focused on stopping malicious organizations and organizations that are considered to pose a threat.

We don’t need to be too surprised if FPI or Rizieq Shihab are blacklisted on Facebook, this is because their work is known to be disturbing. The general chairman of PA 212, Slamet Maarif, is suspicious that this is government intervention. Maarif suspects that the government has prompted Facebook to prevent posts related to FPI and Rizieq.

Of course it doesn’t make sense, what is blocking is Facebook as a company that has power over it. Where did Jokowi whisper to Facebook, moreover, there are still many affairs in Indonesia. So, FPI should have launched its protest to Facebook, not to the government.

Or maybe FPI and various organizations that have ties to the former mass organization, don’t need to use FB, after all, Facebook is a product made by infidels. FPI and its dedengkot also often voiced anti-foreigners, but it turned out that when FB access was blacklisted, they vomited. Of course, the inclusion of FPI and some people who are considered dangerous to the black list, should be able to make FPI and friends to be creative by making their own social media applications.

Maybe the anger of FPI and friends is because Facebook is considered a social media that is able to garner support from netizens. However, they are not aware that those who spread hatred on Facebook will also be hated in the future.

One thing we must agree on is that Facebook has community standards that we must adhere to from the first time we have a Facebook account, and Facebook has the right to give sanctions in the form of warnings to blocking.

The inclusion of FPI and Rizieq Shihab into the Facebook blacklist does not seem to be too urgent, this can actually be a momentum for the community to be careful in social media.

)* The author is a citizen living in Banyumas