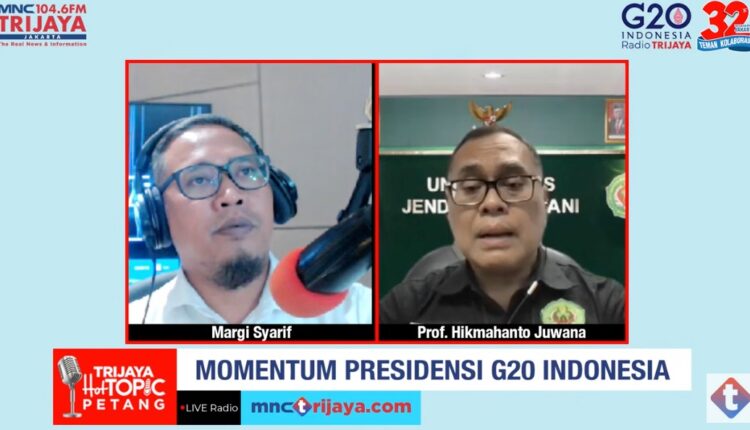 Jurnalredaksi, Jakarta – The Chancellor of the University General Achmad Yani, Hikmahanto Juwana emphasized, the G20 Presidency is the right time for Indonesia to show its success in development, for example infrastructure development. This is very effective considering that those present at the G20 forum are delegates of G20 participating countries.

“The delegates are large in number. They can see that Indonesia today, like Jakarta when compared to 20-30 years ago is clear. When viewed, for example, the existing infrastructure, highways, buildings that are clawing at the sky is different from 20-30 years ago. That’s the first issue,” Ikmahanto said in the Trijaya Hot Topic Evening, Thursday (6/10/2022).

The second issue that can be branded by Indonesia, according to Hikmahanto, is tourism. The G20 moment is an opportunity for Indonesia to show Indonesia which is rich in tourist destinations.

“Those from abroad can export, especially from G20 countries regarding Indonesian tourism information. We hope that the media can disseminate it so that it can attract tourists from outside the G20,” he said.

Finally, said Hikmahanto, what can be lifted from the G20 is that it can show the international world that Indonesia is a safe country. The reason is, there is an assumption that Indonesia is an authoritarian country and there are violations of human rights (HAM).

“Anyway, the negative things that so far may be a label, yes, when people from outside Indonesia. Later they will see for themselves how Indonesia is. This is a good opportunity for us to show that we are not like that,” he explained.