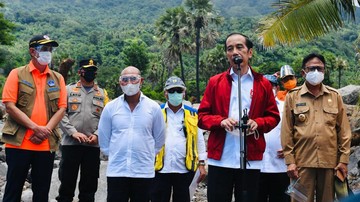 NTT and NTB are being hit by flash floods and landslides. The disaster has killed more than 50 people. President Joko Widodo (Jokowi) received a report regarding the natural disaster and conveyed his condolences to the victims.

In his statement through the SetPres YouTub channel, Jokowi expressed his deep condolences for the victims who died in the disaster. He also admitted that he had ordered his staff to immediately evacuate and treat victims. In addition, also to immediately deal with the impact of the disaster.

The former Governor of DKI Jakarta also requested that disaster management in NTT and NTB be carried out quickly and well. Especially with regard to health services and the availability of logistics for refugees.

On April 6, 2021, Joko Widodo held a limited meeting via video conference from the Merdeka Palace, Jakarta, to provide direction regarding disaster management in the two provinces.

The first instruction given by the Head of State was to speed up the process of evacuating, searching and rescuing undiscovered victims.

During the search and rescue, the President asked the Minister of Public Works and Public Housing to help deploy heavy equipment from various nearby locations to facilitate the search process. If the land route is still difficult to penetrate, Jokowi will also give instructions to accelerate the opening of sea and air access which have been cut off due to damage to a number of connecting infrastructure.

Then the Head of State also asked his staff to ensure the presence of health services and medical assistance that were badly needed by the victims. In this case, the Minister of Health will deploy a medical aid team to arrive at the disaster site as soon as possible.

Jokowi also asked the Minister of Health to be able to increase the number of health service places in the field, as well as hospitals to treat victims, and ensure the availability of medical personnel and medicines.

Since the first day of the disaster in NTT and NTB, the government has indeed sent a number of aid to the disaster site. However, due to extreme weather constraints and disconnection of connecting access, the aid has not fully reached the point of location.

The President also instructed the BNPB and local governments to immediately record evacuation points and ensure that logistics, tents and field kitchens have met the basic needs of the refugees. This includes the needs for babies and children, especially clean water and toilets.

To support the course of the disaster management process, President Jokowi specifically ordered the Minister of Public Works and Public Housing to accelerate the repair of supporting infrastructure that was damaged due to disasters such as collapsed bridges and disconnected connecting roads.

Furthermore, Presden also asked for early anticipation of the potential impact of extreme weather that occurs in various regions in Indonesia. Information and warnings from BMKG regarding this matter are very crucial and the publication of them must be intensified.

So that all regional heads and communities can access, monitor, weather and climate predictions issued by the BMKG. They must know everything so that the community can increase their preparedness and vigilance to face risks such as subsequent floods, landslides and strong winds.

Meanwhile, in his press statement, Head of the National Disaster Management Agency (BNPB) Doni Monardo said that the government, among other things, had brought in doctors from the Provinces of South Sulawesi and East Java to support the handling of disaster victims in NTT and NTB.

Doni said that the stock of medicines and medical devices in NTT and NTB was still sufficient to serve disaster victims, except for medical devices for treating patients with fractures.

This effort is of course an optimal disaster management, especially since the government also helps repair houses of residents who have suffered damage due to the disaster.