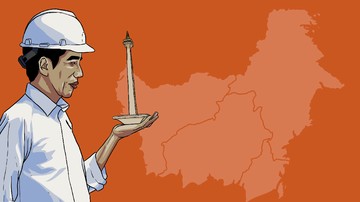 The nation’s capital will be moved from Java to Kalimantan. This transfer is expected to bring progress to the nation, because there will be an even distribution of progress in various regions in this country.

Moving the national capital to Penajam Paser Utara, East Kalimantan, is still a hot topic to talk about. Understandably, this is the first time the public has seen the procession of moving the capital city firsthand, which of course requires great preparation. They believe in the benefits of this transfer, for the betterment of the nation.

Andrinof Chaniago, former Minister of Development Planning stated that the goal of moving the country’s capital city to Kalimantan is for the progress of the nation, for the sake of a new face that is more Indonesia-centric. When the capital city is moved from Java to Kalimantan, it will leave the old stigma of being Java-centric, which has existed for hundreds of years.

The island of Java has long been plotted as the capital of the archipelago. Not only during the independence period, but also in the Dutch colonial era. Even during the Majapahit kingdom, Java was also used as the center of their government. Therefore, when Indonesia became independent, it was very natural for Batavia, which changed its name to Jakarta, to be the capital of the country.

However, the weakness of Java centric is that all development is on the island. As a result, there is an imbalance between the island of Java and other islands. Even though Indonesia is not only Java, but there are also Sumatra, Kalimantan, and thousands of other islands. Java has become synonymous with Indonesia when it shouldn’t be, because the manifestation of this country is people of various ethnicities.

If the capital city is moved to Kalimantan, this country will automatically progress, because there is equitable distribution of development. First starting from Borneo and then spread to other islands. Over time, all regions will experience progress, from Sabang to Merauke.
Andrinof continued, many people should not underestimate Kalimantan as a former forest area. The reason is because the island has a lot of potential natural resources. Starting from coal and other mining materials, to the natural wealth in the wilderness.

However, the development in East Kalimantan due to the creation of a new capital city does not automatically damage the forests in it, because it has collaborated with experts, ranging from technical engineers, architects, to environmental experts. Efforts are made to minimize forest damage when there is a new state capital. Moreover, the area where the capital was made is customary land given by the Kutai Kertanegara Kingdom, so it must be preserved.

According to Andrinof, Kalimantan can be built without destroying its natural wealth. In fact, later what can be highlighted is river tourism and all its exoticism. If it is beautified, we are optimistic that it will attract the attention of many foreign tourists. Even Malaysia was already ready to invest when it knew that in East Kalimantan there would be development for the tourism sector.

Investment from Malaysia proves that moving the nation’s capital is a positive thing. If there are many investors, it will automatically increase the country’s foreign exchange. In this way, the government’s expenditures to build the new state capital in Borno will be covered from the profits from the investment.
The number of investors also shows the confidence of the international community.
The progress of the nation will be realized from the relocation of the national capital because Kalimantan has a lot of potential, ranging from natural resources, human resources, to agricultural products. We are optimistic that Indonesia will be more advanced when the capital city is moved, and problems in Jakarta such as traffic jams will be resolved soon.

Efforts to Handle Covid-19 Based on Scientific Studies