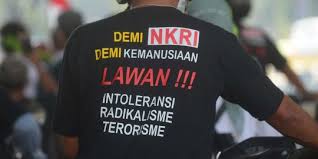 Radicalism is a virus that undermines diversity in Indonesia, omission of radicalism will easily ignite civil war which ultimately destroys peace in society.

In the history of the development of Islam, known as the Khawarij, the Khawarij itself is a response to disagreement on the arbitration taken by Caliph Ali bin Abi Talib in the settlement of the Shiffin war with Mu’awiyah ibn Sufyan. In its journey, the khawarij can be crushed, but their thoughts metamorphose in various forms of firqah. So that until now there are still many ideas that are really fanatical, textual and fundamental, where those who have different opinions with them will get the “infidel” stamp. “heresy and misguidance”. Stamps like this are what make fellow Indonesians hate each other.

Radicalism in the name of religion often leads to conflict to its peak, namely terrorism at the level of endangering the stability and security of the state. In the end, this radicalism actually causes war which actually creates a feeling of insecurity. At the lowest level, radicalism disrupts social harmony and harmony. Claims of “Heretic”, “Bid’ah”, and “Kafir” for those who do not agree with him make the public restless. Ironically, the unrest is considered a challenge to da’wah by the radicals. One thing that radical Muslims often misunderstand is that the meaning of da’wah is to invite, not to force.

Linguistically, radicalism comes from the word “radix” which means root. In the KBBI, radicalism is defined as an understanding or sect that wants social and political change or renewal by means of violence or drastic. A radicalist will assume that a different view or way of religion is the enemy. Radicalism arises as a result of the literal interpretation of religious texts without looking at the historical and sociological context so that these texts are often claimed to legitimize acts of violence against fellow human beings.

Worse, young groups including university students are also often the targets of recruitment by radical groups. Youth which is seen as a period of searching for identity and emotional instability is often used to infiltrate radical ideology into young people. In addition, youth groups who are in the poverty line are also one of the main reasons they join radical organizations so that jihad is taken as a shortcut to end suffering.

Radicalism that leads to acts of terror has proven to have destroyed many countries. If this is not prevented from the start, Indonesia will fall apart. There are countless content of radicalism on the internet. Religious radicalism that is glorified can actually cause divisions among religious people with the same belief or with other religious groups.

Radical understanding in carrying out and spreading its understanding tends to use a method that is not in accordance with what has been used as a guideline for the daily life of Indonesian people. Radicalism continues to try to feed the nation’s generation with what they understand as a way of life and a solution to the nation’s problems.

The use of social media also makes the radicalization process much more massive and faster. In the past, it took a long time for a teenager to have a significant role in a terror group. Those who are interested in violent teachings may not necessarily meet the appropriate group. The discussion processes on social media certainly cannot be separated from the monitoring of radical groups. Those who are consistently involved in the discussion will be invited to a more exclusive group via the WhatsApp or Telegram application.

Starting from exchanging messages, someone who is exposed to radicalism may then hate his colleagues who have different views with him, they will show that what he believes is the truth, while others are heresy.

Of course, this cannot be allowed, because Indonesia can grow with the spirit of Bhinneka Tunggal Ika. One of the characteristics of da’wah content that leads to radicalism is content that continues to blame the government or content that thinks that democracy is not suitable to be implemented in Indonesia.

Fuel Price Adjustment Has Been Through Various Study Processes