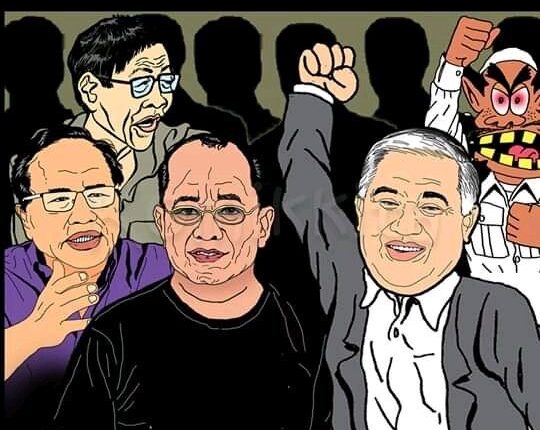 A number of government opposition gathered and declared the Coalition for Action to Save Indonesia (KAMI). The public was also asked to be aware of this provocation because it was deemed to interfere with the handling of Covid-19.

The Coalition for Action to Save Indonesia (KAMI) has succeeded in confusing what it is doing. The declaration to save Indonesia actually contained a paradox where at the time of the declaration, the group did not comply with the health protocol. So what is the scenario that the private opposition group is developing?
Denny Januar Ali or also known as Denny JA has revealed 3 scenarios that WE might play.

The owner of the Indonesian Survey Institute (LSI) said that the 3 schemes were open because political direction was practically unpredictable or like a wild ball. Practical politics itself can be designed to enter and exit through different doors.

In the first scenario, Denny explained that KAMI brought Jokowi’s government down before the end of 2024. However, according to him, KAMIwere not strong enough to overthrow the current President Jokowi.

According to Denny, this scenario is only open if KAMI are solid until 2024. However, it is said that he said, KAMI strength is also a drawback. He considered that WE had the potential to break when we had to focus on only one presidential and vice presidential candidate, because of the various figures in it.

The third scenario, Denny believes, is that KAMI are here as mere flowers of democracy or just a sweetener for the current government.

On a different occasion, Abdul Kadir Karding as a PKB politician considered that what KAMI was doing was a coalition of people who lost the 2019 Presidential Election (Pilpres).

According to him, this can be seen from the figures who are members of the KAMI, who are mostly people who are disappointed with the results of the 2019 presidential election.

Karding also views that the KAMI declaration is an inappropriate step. In a democracy, the best position that the loser in the presidential election should take is to support the government for things that are positive.

Now the Indonesian people are working together in solving various problems of the nation that was born in the middle of the corona virus pandemic. Of course it is not right if the Declaration made by the US violates health protocols so that it can interfere with the government’s efforts to deal with the Covid-19 pandemic.

Pandemic and Epidemiologist from Griffith University Australia, Dicky Budiman, said there was a potential for the covid-19 cluster after the Coalition for Action to Save Indonesia (KAMI) declaration event at the Proclamation Monument Field.

In this action, the crowd seemed to ignore the health protocol to prevent the corona virus. Hundreds of people gathered without heeding the covid-19 health protocol related to maintaining distance.

Dicky assessed that there was no application of distancing in the KAMI program. According to him, this indicates that some elements of society are not disciplined in implementing health protocols. Even though as long as the pandemic has not ended, all components of society must remain disciplined in implementing interventions without drugs and vaccines, namely the application of preventive behavior.

This statement expressed by Dicky reflects on the formation of a mega cluster due to the Black Lives Matter demonstration in Australia after the death of George Floyd in the United States. The demo was held in Melbourne, ignoring the use of masks and physical distance.

The demonstration was attended by around 10 thousand people and became a Covid-19 mega cluster. As a result, 242 cases occurred in apartment buildings in the city connected to or related to the Black Lives Matter protest in Melbourne.

However, it seems that this action was not just an action, one of the participants in the action admitted that he received a fee of Rp. 200,000, it was Mrs. Aminah. When asked what the reason was for coming to the Proclamation Monument, she didn’t know what the reason was, it’s just that Mrs. Aminah admitted that she would come because she was invited and got money and snacks.

The KAMI Declaration has indeed attracted the attention of the public at large, but that does not mean that the people willingly support this movement. If it’s like this, when will KAMI move on? The presidential election is still long.

) * The author is active in the Cikini Press and Student Circle) *