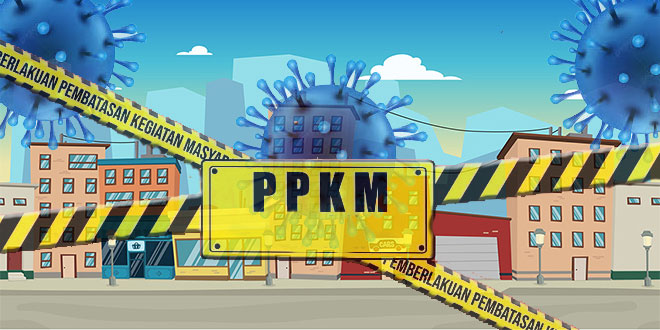 The PPKM level 4 which has been extended again certainly has a good goal, namely to reduce the spike in Covid-19. Therefore, the community is expected to always obey the rules so that the expected results can be maximized.

It feels like we all want to be free from Corona as soon as possible, and the government has granted the people’s requests with several programs: national vaccination, PPKM, and several other programs. All of this is taken so that all are safe from this dangerous disease, because last month the number of patients per day had increased. No wonder the duration of PPKM continues to be extended.

We have been living PPKM for a month. During this time, there are people who are obedient and really don’t travel because they follow the government’s advice. But unfortunately there are still those who do not obey the rules. It’s sad when there are people like this because it seems as if they are immune to Corona, even though the virus can lurk from anywhere.

Rizal E Halim, Head of the National Consumer Protection Agency asked the public to remain disciplined in implementing health protocols during PPKM level 4. He saw that there were still many violations committed by the community. For example, in the red zone, it is forbidden to hold Friday, but some still do it.

Rizal continued, another violation is the falsification of vaccine certificates. When in areas affected by PPKM level 4 people who want to drive by public transportation on land, sea, and air are required to show a vaccine card, those who haven’t got it instead choose to ‘shoot’ or make fake ones.

These violations caused PPKM to become chaotic because they could potentially increase the number of Corona patients again. If there is a new cluster of places of worship, then it can actually be prevented because it is temporarily closed, but instead opened by the public. Likewise with forgery of vaccine certificates, OTGs can infect all passengers on public transportation.

Indeed, there is a saying in the community ‘rules are made to be broken’ but during a pandemic, especially PPKM level 4, there should be no violation at all. The reason is because if there are a few who commit mischief, many people can imitate it (because it will usually go viral on social media). This can lead to mass violations.

When there are mass violations, it can increase Corona cases and the consequences are fatal because the worst possibility is mass death. Imagine if you are still determined to break through the barrier and then 2 weeks later lose your life because of Corona. Surely you don’t want to, right?

Therefore, during PPKM, let us be orderly in obeying the rules enforced by the government. Do not travel unless there is an urgent need, for example for work that cannot be replaced by someone else. The company is also obliged to implement work from home and do not force employees to come to work, because to avoid office clusters.

In addition, strictly adhere to the 10M health protocol. The most basic is wearing a mask and preferably wearing 2 layers (disposable mask and cloth mask) to increase the filtration power. Limit gatherings with other people and keep your distance and no physical touch.

Protocols must be adhered to so that the number of Corona patients does not increase again. On August 1, 2021, there are ‘only’ 22,000 patients per day and must be suppressed again to protect people’s lives. If there is a violation, it will be a pity for those who haven’t got their turn for vaccines or the children, because they will easily get infected from the large number of OTGs.

Acceleration of Vaccination for Health and PEN