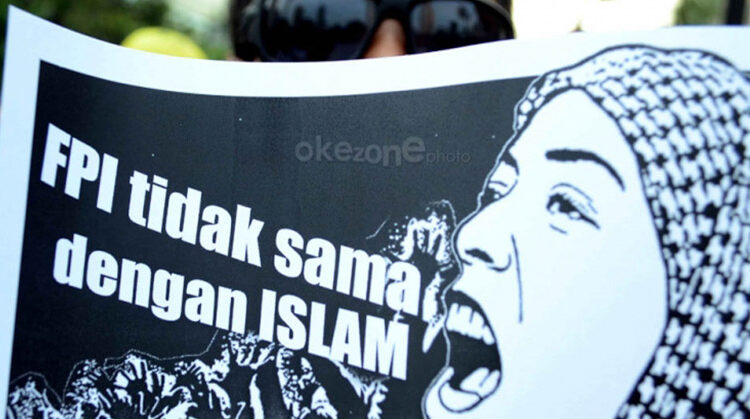 Officially, the government has disbanded and banned any activities in the name of the Islamic Defenders Front (FPI), but this prohibition has actually made a number of former officials say they will form a new organization with the same acronym, namely the Islamic Brotherhood Front. The public also rejected the birth of these organizations because they had the potential to carry the same ideology as those that had been disbanded.

Deputy Chairman of Commission III of the DPR RI, Ahmad Sahroni, requested that all efforts to form a new FPI group fronted by old FPI functionaries must really pay attention to the government.

Sahroni said, if in the future there was a registration of the same group and only changed names, it was only natural for the government to immediately conduct a review and reject the request.

He also asked the police to supervise all movements of FPI officials and members, and even blacklist FPI officials.

Previously, in early December 2020, hundreds of residents from several elements of society who were members of the Alliance for the People of Lampung Cinta NKRI (Alimil Cinta NKRI) held an action at the Adipura Monument in Bandar Lampung City, they rejected the existence of FPI and Rizieq Shihab.

Jupri Karim, chairman of Alimil, said the action was carried out because the people of Lampung were already resentful of provocation and arbitrary actions by Rizieq Shihab, who were considered to have caused chaos and division in Indonesian society.

He also added that the government is currently doing everything in its power to restore the situation due to the Covid-19 pandemic. However, the efforts that have been made so far have been countered by the provocations often carried out by the FPI group led by Habib Rizieq.

In a different place, Surabaya. Dozens of masses who are members of the Surabaya Citizens Element held a demonstration in front of the Grahadi State building, Surabaya.

The masses were also involved in unfurling banners rejecting Rizieq Shihab’s visit. The coordinator of the action, Ahmad Jazuli, said that the rejection was stated because Habib Rizieq’s arrival was deemed to bring badness to the conducive situation in East Java.

He considers that FPI is an organization that endangers the unity of Indonesia. Moreover, his lectures are often considered to be divisive to the nation.

This action is also a support for the steps taken by the TNI and Polri to disband FPI which is considered an arrogant and radical mass organization.

On a different occasion, right at the intersection area of ​​Banda Aceh, garlands and banners lined up with a narrative of gratitude to the government for not extending FPI’s permit.

The flower wreath also includes the names of community elements, such as the Anti-Radicalism Association, the Pancasila Muslim Community, the Aceh Islamic Youth Group and the Nusantara Youth.

It seems that similar actions did not only take place in Banda Aceh, banners reading the same thing were also scattered in Aceh Barat Daya, Aceh Jaya and Aceh Singkil districts.

Meanwhile, Spokesperson for the Ministry of Religion (Kemenag) Abdul Rachman stated that no more parties are allowed to use the names and attributes of the Islamic Defenders Front (FPI) in various activities, including in matters of da’wah.

For this reason, the Ministry of Religion has asked former FPI leaders and members to comply with the government’s final decision by not holding new activities that have the potential to trigger tensions in the community.

He also asked former FPI leaders and members to have a mature perspective in interpreting religious and national life in Indonesia.

The Ministry of Religion also appealed to all elements of the nation to continue to maintain the conduciveness that has existed so far.

People also shouldn’t be easily provoked by certain groups who easily hate something just because they have different opinions.

The existence of FPI has made many people feel uneasy, the provocative actions that are often carried out by FPI of course do not show their identity as a good religious role model, so it is only natural that many people reject FPI’s presence.

The Job Creation Law Opens Business Opportunities During the Pandemic