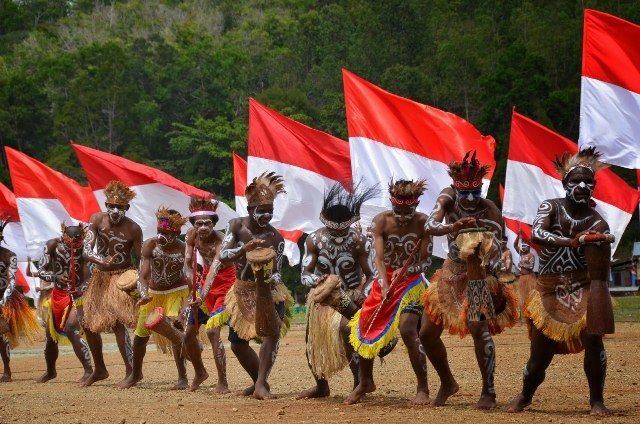 The formation of the New Autonomous Region (DOB) is purely the aspirations and desires of the Papuan people, because they want their lives to be more prosperous. With the new province, various facilities will be built in the context of the welfare of the Papuan people.

Papua is a very large area and is the largest island in Indonesia. The area of ​​Papua which stretches for more than 400,000 KM2, is too wide if there are only 2 provinces. Therefore, when President Jokowi inaugurated 3 new provinces, namely South Papua, Central Papua, and Central Highlands Papua, the community was very much supported because it would ease the span of control of the local government.

If there is a new province, the people cheer for joy, because they asked the government themselves. In 2019, a number of Papuans had an audience with President Jokowi and asked that there be a new province, so that their lives would be more prosperous. The request was granted in 2022 and the results were satisfactory because 3 new provinces were plotted based on culture and customs in Papua.

Member of the Indonesian Parliament, Yan Permenas, stated that the Papuan people support the new autonomous regions. Residents in various customary areas fully support the expansion of the territory. The Papuan People’s Assembly (MRP) also agreed on the existence of new provinces in the Earth of Cendrawasih. In a sense, all Papuans agree on the new DOB and indeed those who have wanted it for a long time.

The community asked for additional new autonomous regions so that their lives would be more prosperous. First, when there is a new province, new infrastructure will be built as well. With the new road, the journey of the community will be smooth, so that it has a positive impact on the economy. The reason is because the flow of merchandise shipments also goes smoothly, and it is hoped that it will reduce the price of goods in Papua.

Then, when there are 3 new provinces, a new wholesale market will also be built. The existence of the market is very important because it is the economic center of the community. Although there is currently a marketplace , some residents prefer to shop directly because they can hold their goods and bid to the merchants. The market will accommodate traders and the community’s economic activities will be more lively.

Traders in the market who are women or what are called ‘mama’ also benefit from the addition of new autonomous regions. The reason is, when there is a new provincial government, the budget is also new. Part of the budget is for assistance to mothers, in the form of additional business capital (cash), machines for work (grating machines and other machines), tables for selling, etc.

With the help of the provincial government, the mothers will be more enthusiastic about selling. They rack their brains so that their merchandise sells and the results are to help their husbands make a living. As a result, the lives of Papuans will be better because the income of each family will increase.

When there are new provinces, various buildings are automatically made, including school buildings. With the new schools, Papuan children can go to high school. They can study in peace because they get an otsus (special autonomy) scholarship given by the central government.

Through education, it will also improve the economy. The reason is because Papuan children can go to high school and then apply for jobs, and earn their own income. They can improve their fate by working hard when they are employees, or starting their own business.

The government also facilitates Papuan youth by inaugurating the Papua Youth Creativity Hub. With this forum, young Papuan people are invited to continue to be creative and create businesses in the field of start-ups and craft arts. The government supports Papuans to be more advanced and provides business assistance. They are encouraged to be independent and become young entrepreneurs who are advanced, as well as prospering their families.

With business assistance, Papuan youths understand how to do business, let alone make a business in the digital era. They learn how to internet marketing and market their products. The provincial government also supports the steps of the central government by providing a comfortable place and representative mentors. Local government staff also helped to collect data on young entrepreneurs in Papua.

The division of territory brings many positive impacts for the Papuan people, and indeed those who have wanted it for a long time. If anyone disagrees with the new autonomous regions, their capability as a community on the Earth of Cendrawasih will be questioned. The majority of residents support the new autonomous regions and should not be provoked by individuals who do not like regional expansion.

The formation of the Papua New Guinea is the government’s way of making life easier for the citizens. If there is a new province then there will be various new facilities, such as paved roads and main markets. There will be a new school building and Papuan children can complete their studies up to high school. They then apply for work or entrepreneurship, and realize their family’s desire to be more prosperous.

Beware of Camouflage Spread of Radicalism in Tourist Areas