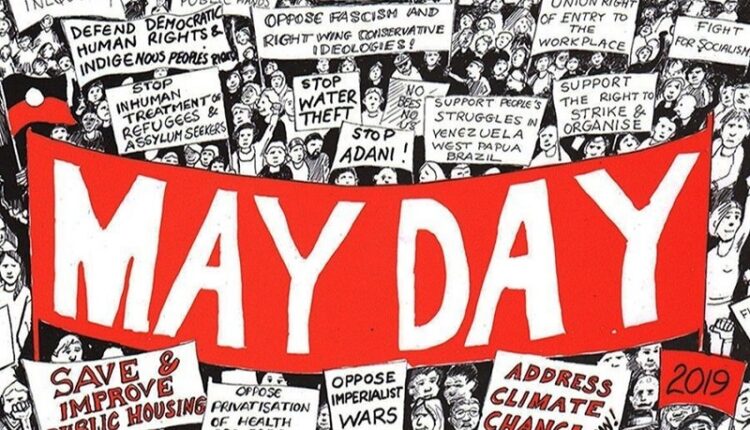 Mayday Commemoration Must Be Done Peacefully

Mayday aka Labor Day will be commemorated on May 14, 2022, it must be carried out in a peaceful and orderly manner. This obligation must be fulfilled because demonstrations are vulnerable to being infiltrated by provocateurs who trigger anarchic actions.
The labor element looks ambitious to celebrate Mayday on May 14, 2022, even though the International Labor Day has actually passed. On May 14, 2022 celebrations, labor groups plan to stage demonstrations and voice various demands.

The President of the Labor Party Said Iqbal stated that the Mayday commemoration would be held in front of the Indonesian Parliament building. Then a labor declaration will be held at the Jakarta International Stadium, although until now it has not been licensed. There were 11 demands by workers, ranging from rejecting the increase in VAT, refusing to increase the price of basic necessities, rejecting the Omnibus Law on Job Creation, and so on.

The public was surprised because the workers insisted on demonstrating even though it was still during the pandemic. If indeed the event is to commemorate Mayday, can’t a peaceful protest be held? There is no need to invite the masses who also have the potential to invite Corona transmission. Currently the patient curve is indeed decreasing but it is not a justification for making crowd events such as mass demonstrations.

Workers should be obliged to learn from the experience of previous demonstrations, which created a new Corona cluster and when tested randomly, there were many protesters who turned out to be positive for Covid-19. Then, any demonstration during the pandemic will also never get permission from the police. They must remember it and obey it.

Mayday commemorations must be held peacefully because if they take to the streets, workers will actually disturb the public. They create traffic jams and waste a lot of people’s time. Isn’t time money? Do not let the ambition to commemorate Labor Day even harm others, for example to an ambulance driver who is stuck in traffic and has the potential to prevent patients from reaching the hospital.

Demonstrations in the context of Mayday also have to be watched out for because Anarko could attend. They deliberately entered the demonstration arena, while it was crowded and it was not known which worker was Anarko. If there is Anarko, then the danger is their negative behavior which damages public facilities, some are even desperate to steal. If public facilities are damaged, the loss could be millions of rupiah. Do workers want compensation?

In addition, be wary of groups that take advantage of labor demonstrations and become provocateurs. They joined in the demonstration but instead distorted the purpose of the demonstration. Although the cloud was claimed to be for the welfare of the workers and the people, the group heated it up to insult the government. They deliberately raise political issues for their own interests.

Don’t let provocateurs riot on the labor demonstration on May 14, 2022, because it will turn into chaos. Demonstrations can turn into riots and fires, and tragedy strikes and it is feared it will be like 1998 when there were large-scale demonstrations. The workers must be more careful because in a crowded atmosphere like a demonstration, there is no difference between workers, Anarko, and provocateurs.

Mayday should be held peacefully, for example with social services, distribution of basic necessities, and so on. Don’t even have a massive demonstration because it will harm a lot of people and invite traffic jams. Also remember the dangers of Corona that lurk.

The demonstration in commemoration of Mayday should be canceled because it could be carried away by Anarko and provocateurs who take advantage of opportunities in adversity. Labor elements are expected to be wise and not be influenced by provocations by the labor elite who only seek popularity.

)* The author is a contributor to the Nusa Bangsa Activist Forum