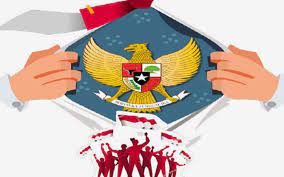 Nationalism is the bull of the younger generation to ward off radicalism. If all youths love Indonesia, it will not be easy to be influenced by radical groups.

The spread of radicalism is really sad because this understanding is clearly dangerous and can damage the nation. Radical groups not only target adults but also teenagers and young people, because they are still looking for identity and then secretly persuaded. Therefore, the younger generation must be fortified so that they are not easily deceived by radical groups.

Habib Luthfi bin Yahya, Member of the Presidential Advisory Council, stated that the younger generation as the nation’s next generation must be fortified from ideas that undermine the Unitary State of the Republic of Indonesia. These ideologies are like radicalism, terrorism, and intolerance. The stronghold is nationalism and the glory of the nation.

If young people have a high sense of nationalism then they will love their country and will not be invited to establish a caliphate state by radical groups. They are aware that Indonesia was built with diversity and diversity in diversity, and does not fit the concept of a caliphate state. Moreover, radical groups never fought in the pre-independence era but wanted to change Indonesia as they pleased.

On the other hand, the younger generation becomes agents to eradicate radicalism, terrorism, and intolerance. The way to do this is by continuously echoing nationalism and patriotism as well as invitations to be anti-radical on social media (social media). Social media is a promotional event because many Indonesians have accounts, so this method is very effective. Subconsciously they will be embedded with the dangers of radicalism so that they reject this understanding.

Habib Luthfi continued, the younger generation must know how fighters achieve independence. They also have to understand that in the past, Walisongo used to spread religious teachings with full tolerance. In a sense, tolerance in Indonesia has existed for a long time, even before the independence period. Tolerance must be preserved for the sake of national harmony.

Intolerance is a case that has occurred in recent years and the perpetrators are always radical groups. They carried out intolerance by sweeping on the holidays of people of other faiths and then forcing them to remove the red hats and statues of Santa Claus, even though they were just decorations. After all, a person will not easily change beliefs just by wearing the hat.

The younger generation can prevent intolerance by stopping their sweeping, because radical groups do not have official permission to do so. Only the security forces are allowed to do the sweeping, while the radical groups have acted beyond their limits. Moreover, the group has been disbanded by the government so it is not allowed to hold the slightest activity, even the logo is prohibited from appearing.

In addition, young people can also invite the public to continue to have a sense of nationalism in their hearts. The nationalism campaign was not only carried out in August as the month of independence, but also in other months. The reason is because nationalism must exist in every Indonesian citizen every day.

Nationalism campaigns can be carried out by holding competitions to sing the national anthem and regional songs. The song cannot be taken lightly because if it continues to be sung, one will realize how hard the struggle was in the pre-independence era and love one’s country more and more.

Nationalism is the main bulwark for the younger generation to ward off radicalism and intolerance. These two dangerous ideologies must be eradicated right now because they can divide peace. Young people must understand that tolerance existed in Indonesia hundreds of years ago, in the Walisongo era, so they also do it to prevent radicalism.

Papuan people are tired of the brutality of KST Papua