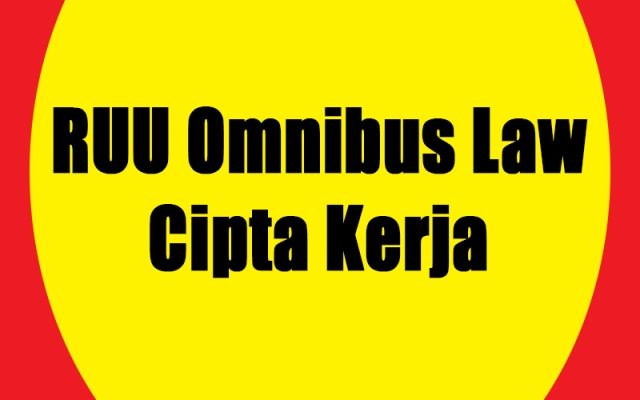 Omnibus Law Cipta Kerja are the Savior of Economy

The covid-19 pandemic hit the world economy, including Indonesia. In order to avoid a crisis, the government will immediately formalize the Job Creation Bill which not only affects the world of work. However, it has also improved the country’s financial condition, because it has relaxed investment regulations, so that more investors will enter Indonesia.
Since March 2020 Indonesia has been gripped by the Covid-19 pandemic and has resulted in not only the health sector but also the economy. Many factories went bankrupt due to weak people’s purchasing power. If this is ignored, it will be very dangerous because this country could fall into an economic recession, because its financial growth is not up to 5% per quarter.
To prevent recession or economic crisis volume 2, a Job Creation Bill was drafted which had an investment cluster. Agung Purnomo, a researcher from a research bureau stated that the Job Creation Bill was a savior because there were simplified permits. So that investors will be interested because the investment regulations are not confusing.
If in the past they wanted to invest in Indonesia but canceled because they took too long to process the permits, now they are not. Because there is already an ease of doing business cluster in the Job Creation Bill. In the past, when you were going to make a permit you had to bribe here and there. It is not certain that the permit will be issued quickly because the bureaucracy is confusing.
However, now the steps to formalize a Limited Liability Company will be faster, because it can be done through online channels. Investors are excited because the official permit is issued quickly so that they can do business safely in Indonesia. This country is considered suitable for investment because it has potential natural resources and intelligent human resources.
The investment cluster will be able to change economic conditions in Indonesia. Because in addition to increasing the number of incoming investors, those who will make projects from investment are prioritized to create labor-intensive industries, such as textile factories. So that it can absorb a lot of workforce and reduce the number of unemployed in Indonesia.
In addition, investors also get business priority in digital-based companies. Currently, many young people are smart and creative and create start-up companies but lack the capital to expand their business. When investors come in and pour money in, their business can run more smoothly and automatically requires more employees.
This will create a positive domino effect because employees become prosperous and purchasing power will increase again. When the purchasing power increases, the market will be more vibrant and the sales of traders will sell out. The economic wheel is turning again and economic growth in Indonesia is rising again. This country can survive the threat of a terrible recession.
Another positive domino effect also occurs in the investment yield company environment. When the building is built, the surrounding community will be splashed with sustenance. Because the workers fill the stalls on either side and need a bed in the boarding house. Residents around the company will benefit from the culinary business and boarding houses.
Foreign investment can also save Indonesia from the emergence of many talented young people. Those who want to sell skills can start their own company, they don’t have to go abroad because they were tempted to pay US dollars. Because now, when we want to create a Limited Liability Company, there is no requirement to have a minimum capital of 50 million rupiah.
Therefore, as good citizens, we must support the Job Creation Bill. Because the investment cluster and the ease of doing business cluster will bring back the financial situation in Indonesia. There will be a lot of foreign investment and opening of new companies. Automatically they need labor and unemployment will decrease drastically.

Edi Jatmiko, writer is a contributor to the Cikini Press Circle and Student

Covid-19 are still lurking, We Must Tighten Health Protocols