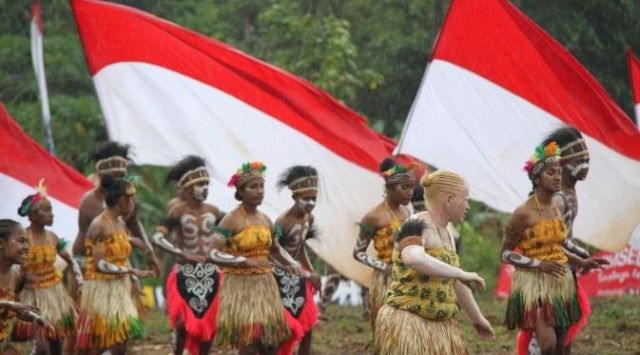 Papua is the Integral Part of the Republic of Indonesia

The provinces of Papua and West Papua are located in the far east, but they are still part of Indonesia. These two provinces have legally belonged to the Republic of Indonesia since 1969. If there are parties who provoke that Papua is being ignored by the government, then he is wrong. Because President Jokowi is trying to be fair in advancing all regions of Indonesia.

Mount Jayawijaya is famous as the highest point in Papua. Indonesian people are very proud to have it, especially at its snowy peak, it’s really exotic. The Papua region is also famous for its natural beauty in Raja Ampat and is a favorite tourist spot for a vacation. The beauty of Cendrawasih Earth is proud of all Indonesian people.

Even though Papua is in eastern Indonesia, the Indonesian people still love it. Because they are aware that the original inhabitants of the Earth of Cendrawasih are fellow countrymen. Therefore, if someone is babbling that Papua was colonized by Indonesia and must be independent, he is wrong.

Although Papua only joined as a province in Indonesia in 1969, its status is already legal, both in the eyes of national law and international law. There is no such thing as the State of West Papua. It is just an issue raised by the Free Papua Organization. As the name implies, they want to be separated from the Republic of Indonesia and fly the Morning Star flag.

The OPM, which was born in 1965 until now, does not agree with the results of the pepera (popular opinion determination) in 1969. In fact, in this important moment, 100% of the Papuan people agreed to join Indonesia, and there was no manipulation. The OPM accusation is considered windy, because the proof is that until now the Papuan people love NKRI.

According to international law, all areas that were former Dutch colonies would belong to Indonesia. Meanwhile, Papua was colonized by the Dutch, so that when it became independent in 1945, it automatically became Indonesian territory. Even from historical tracing, the territory of Papua used to be included in the Majapahit Kingdom, because some of the officials wore the feathers of paradise.

Ida Bagus Made Bimantara, Director of Europe I at the Ministry of Foreign Affairs stated that 99.5% of countries in the world agree that Papua is part of Indonesia. Meanwhile, only one remains, namely Vanuatu, which continues to herald Papuan independence. Vanuatu is an archipelago in the South Pacific and they should not interfere in Indonesia’s internal affairs.

As a small country, why should they raise the issue of Papua in international forums? It could be that Vanuatu is just looking for attention so that the world’s eyes will spot it. Even though the people of Cendrawash Earth never want to be separated from Indonesia, because they feel that the Jokowi government’s attention is very big. They ignored Vanuatu’s babbling.

Vanuatu does not know that in Papua there is a special autonomy program that has been running for 20 years. This privilege makes them have a Governor and Mayor from indigenous Papuans, and the right to receive funds to develop their territory. Currently, Bumi Cendrawasih has advanced, even in Mimika the situation is like a metropolitan city.

The government has also never abandoned Papuans. As long as they are able, they will be appointed as officials. An example is Freddy Numberi who was a minister. In addition, there is Billy Mambrasar who is President Jokowi’s Special Staff. This intelligent young man is believed to be an employee with a special position at the Palace, at the age of 30.

Papua is an inseparable part of Indonesia. Don’t let anyone be provoked by the babble of Vanuatu or OPM. There is no West Papua state, because it is illegitimate in the eyes of the law. The proof is that the Papuan people do not want to separate from Indonesia and love their homeland, and fully support the government program made by President Jokowi.

) * The author is a Papuan student. Living in Semarang

Synergy is the Key for Indonesia to Win Against Covid-19